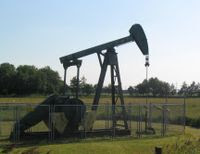 From the department of reduced-supply-leads-to-higher-prices:

Oil prices surged as high as $86 a barrel Monday for the first time after OPEC said crude production by non-member countries is likely falling even as global demand for oil is rising.

Prices were also supported by concerns that Turkish forces will pursue Kurdish rebels into Iraq, disrupting oil supplies, and by technical buying by investment funds.

Despite the Organization of Petroleum Exporting Countries' decision last month to boost its production by 500,000 barrels per day beginning next month, the rest of the world will likely produce 110,000 fewer barrels of oil per day than expected in the fourth quarter, OPEC said in a report.

At the same time, fourth quarter demand for crude oil will grow by 100,000 barrels a day over last year, OPEC said.

The estimates add to sentiment that crude supplies are tight. Last week, the Energy Department reported that domestic crude inventories fell during the week ended Oct. 5 when they had been expected to rise. And the International Energy Agency concluded that oil inventories held by the world's largest industrialized countries have fallen below a five-year average.

"The fact that U.S. crude inventories fell yet again ... reinforced the market's underlying concern that demand has yet to slow down sufficiently to allow stocks to build, while supply is also perceived to be struggling to catch up," wrote Edward Meir, an analyst at MF Global UK Ltd., in a research note.

Light, sweet crude for November delivery jumped $2.44 to settle at a record $86.13 a barrel on the New York Mercantile Exchange after rising as high as $86.22, a record trading price.

I love that last paragraph. I read a couple of years ago that the inflation adjusted 1980 price was $80 per barrel so I'm starting to wonder why all these news outlets keep changing their reporting.

What I find interesting about this report is that it is the non-OPEC producers that seem to be having trouble matching production. Who knows if that is simply OPEC bluster trying to cover up their own production issues? One thing is certain - if the market (those with enough money to buy and sell oil) believed in Peak Oil then the price would've gone through the roof ages ago. The fact that the market believes that oil production can increase (proved by their responses to OPEC announcements about production increases) shows their ignorance of the subject. In order for a market to operate properly, it needs to have reliable knowledge. Since the oil market has not accepted Peak Oil, it still prices oil as though production can still increase. This will only make things worse when the oil market does realise the truth.

Of course America is the economy which will suffer the most economic impact from this high price because a) the US Dollar is dropping fast, making oil more expensive for Americans and less expensive for the rest of the world, and b) America's infrastructure is more oil dependent than other Western economies (which have higher petrol taxes and more extensive public transport - both of which encourage less oil consumption).
Posted by One Salient Oversight at 12:15

I love that last paragraph. I read a couple of years ago that the inflation adjusted 1980 price was $80 per barrel so I'm starting to wonder why all these news outlets keep changing their reporting.

I know exactly what you mean. I believe it may be a purposeful tactic to prevent any informed debate. Just like the one in the US on federalized/socialized health care.

Or, does it reflect that today's American money is losing value SO FAST that the once adjusted price of $80 dollars a barrel in today's money is actually $101 in TODAY's money?