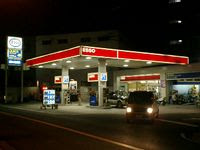 From the department of its-drying-up:

Oil prices have pulled back from record highs after a minister for producers' cartel Opec said the group may now consider boosting output.

Following the comments by Nigeria's oil minister Odein Ajumogobia, US light crude fell 27 cents to $87.34, while Brent pulled back 51 cents to $83.04.

Oil prices had risen due to tensions between Turkey and Kurdish rebels.

Mr Ajumogobia said Opec leaders could now meet as early as 17 November, three weeks ahead of their next planned meeting.

"We are still a month away and it depends what transpires before then," he added.

A potential Turkish invasion of Iraq is sending jitters throughout the market, although I am still shaking my head that the market continues to believe OPEC can boost output.

It's only been a matter of weeks since oil broke through the $80 barrier. Now it is nearer $90. Although I believe that the price of oil will go ever higher, the speed at which it has gone from $80 to $89 is worrying.
Posted by One Salient Oversight at 09:10