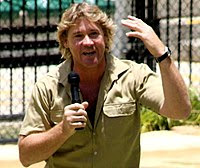 It seems that the world's best known Queenslander, Steve Irwin, has become more influential than many Australians thought.

Irwin's catchphrase, "Crikey!", was never very noticeable to us Aussies but obviously had a big impact upon Americans. I've just noticed the phrase being used by a commentator at a Left Wing website. More than that, the comments thread - pretty much all Americans - did not comment at all about his use of the phrase but rather the content of what he was writing about.

The fact that "Crikey" has now been used by an American, and has not been noticed by an American, possibly shows that the phrase is entering the vernacular in much the same way as "D'Oh!" has around the English-speaking world.

I occasionally use the phrase - but then I'm an Australian, and it is usually synonymous with saying "For crying out loud" or "dammit!", though it is not considered offensive in any way.

At least the Yanks haven't begun to use the word "Drongo"... yet.
Posted by One Salient Oversight at 08:42

It's sad that Irwin is remembered for that word

crikey
1. (especially Australia and New Zealand, not as often, UK) Used euphemistically for Christ as a mild expression of surprise.

"Damnation" (or, more commonly, "damn", or "god damn") is widely used as a moderate profanity, which originated as such from the concept of punishment by God. Until around the mid-20th century damn was a more offensive term than it is today, and was frequently represented as "D--n," "D---," or abbreviated to just "D."

his lil' gem came about randomly. Everyone just started saying '3rd Generation Burke'. It means whatever is on your mind at the time. Often mixed in with monobrain to become '3rd generation monobrain'.

Who's that 3rd generation burke over there by the happysack?


perhaps some others here
http://www.urbandictionary.com/define.php?term=burke

The WORST is that people say it with a fake Australian accent. After nails on a chalkboard, Britney's latest headline, and chomping down on a mouthful of sand, it's the most cringe-inducing thing in America.