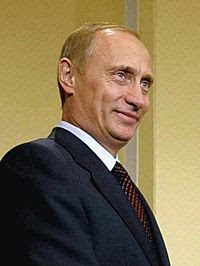 From the department of Only-Nixon-could-go-to-Mongolia:

Russian President Vladimir Putin is due to make a historic visit to Tehran on Tuesday for talks expected to focus on Iran's controversial nuclear plans.

While he has visited Gulf Arab states, his journey to Tehran marks the first visit to Iran by a Kremlin leader since the 1979 Islamic Revolution.

He will also be attending a summit of leaders of Caspian Sea states.

Earlier, Mr Putin brushed aside reports of a plot to assassinate him, which the Iranian government also played down.

The Iranians probably will not believe President Putin is actually coming until they see him on the airport tarmac, the BBC's Jon Leyne reports from Tehran.

Given Mr Putin's recent history of inhibiting Democracy in his own country, his going to Iran may solve nothing. Nevertheless I feel somewhat encouraged that Iran is being approached by others in the international community. Russia does not gain anything with a nuclear-armed Iran and stands to gain much if the Middle East is more peaceful and orderly. Putin is no angel, but I'm hoping he'll be able to broker some sort of agreement with Iran to reduce tensions in the area.
Posted by One Salient Oversight at 12:00