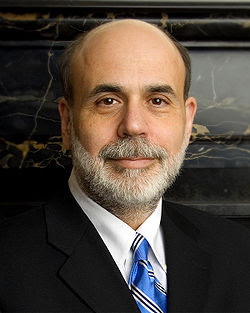 Barack Obama is in the process of reappointing Ben Bernanke as governor of the Federal Reserve. This fact has led me to wonder whether Obama is either ignorant, a fool or an industry shill. There are no other choices.

Bernanke is one of the people responsible for the current crisis. As a member of the FOMC that approved injudicious interest rate lowering under Greenspan, he is jointly responsible for the property bubble which formed. I have argued that point here.

Bernanke has reacted to the crisis badly. First he didn't admit that there was a crisis and then, when the crisis was underway, argued that it was "contained". Again, look at the link above for the details.

Once he realised that things were bad, Bernanke, a student of the Great Depression, acted swiftly in increasing the money supply at a time when the money supply was tightening into deflation. This was not a terribly hard thing to do. Even I could've done it. In fact, since I was actually aware of the crisis years before Bernanke, I would've been able to take pre-emptory actions and done a better job. Yet it's Bernanke who gets the multi-million dollar salary while myself and others bang our heads against the wall in response to the stupidity of those who control vast sums of money.

So the question is - why did Obama not know this? Is he being shielded from reality by a bubble in a similar way that Bush was? Or maybe he has no idea of how economics works and thinks Ben has done a good job. Or maybe Obama is simply having his strings pulled by industry insiders. Whichever one it is is hardly encouraging.
Posted by One Salient Oversight at 19:00 4 comments:

Two quarters of 2009 GDP will be negative. The NBER will not announce an end to the recession at all in 2009.

The U.S. economy shrank at a better- than-forecast 1 percent annual pace in the second quarter as a jump in government spending masked a deeper retrenchment by consumers.

The drop in gross domestic product followed a 6.4 percent contraction in the prior three months, the worst in 27 years, Commerce Department figures showed today in Washington. Revisions showed the economic downturn last year was even deeper than previously estimated.

Two quarters are now officially negative, thus half fulfilling my prediction. We have to wait until 2010, though, for the other half of the prediction to be fulfilled (the NBER not announcing an end to the recession).
Posted by One Salient Oversight at 00:39 2 comments: