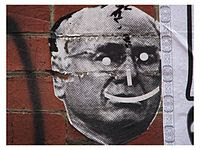 From the department of politics-at-its-very-base:

A contrite John Howard has reversed a decade of opposing symbolic gestures towards Aborigines by promising constitutional change to begin what he calls "new reconciliation".

In an important shift, he promised last night that if re-elected he would hold a referendum within 18 months to incorporate a "statement of reconciliation" into the preamble of the constitution.

It would recognise the history of indigenous people as the land's first inhabitants, their culture and heritage, and "their special, though not separate, place within a reconciled, indivisible nation".

At any other time in the history of the Howard government, this sort of announcement would be as unexpected as it would be welcomed. Spending on Aboriginal welfare dried up after 1996, partly as a response to corrupt activities by some Aboriginal groups, but mainly as a response to Pauline Hanson's rising popularity and desire to punish Indigenous Australians for not having the common courtesy to die out like the history books of yesteryear claimed they would.

But, at this point, the decision to hold some sort of referendum on the issue, along with admissions of care and concern for Indigenous Australians, smacks of simple political opportunism. Moreover it is a grasping of straws in the face of an oncoming election defeat. The sad thing is that most Aussies will see through this.

Posted by One Salient Oversight at 10:11