Ann Coulter and the Gospel 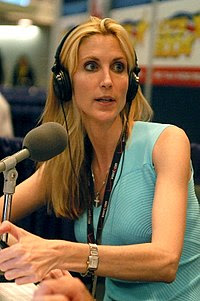 From the department of screaming-harpies:

First of all let me just point out that I don't like Ann Coulter. She believes that the solution to Islamic terrorism is to invade their countries and forcibly convert them to Christianity. She also called a Democratic presidential candidate a fag, which sort of indicates the depth of her political critique.

Although it is interesting for her to come out with this proto-gospel message, it doesn't really catch on to what Jesus did on the cross. If you check out the transcript of the interview she goes on an on about the need to obey but says nothing about faith. Moreover she assumes that Old Testament Israelites could only get to heaven through obedience. Psalm 51 indicates that it is through repentance and faith, as do many other OT passages.

I don't think Coulter understands the gospel... and she is about as Christian as George Bush.
Posted by One Salient Oversight at 10:36

I don't like Ann Coulter either. I've never actually heard her claim to be a Christian other than in some vague, cultural way. She obviously has poor understanding of Christian doctrine.

However, to be fair, her comment about converting Muslims was tongue in cheek and not meant as a policy prescription, and her reference to John Edwards as a fag was also a joke - a reference to an American, pop culture item. It was ill-timed and in poor taste (like most of her comments), but it was not meant in the way you inferred.

WARNING, joke at John Edwards' expense following: Besides, if John Edwards didn't spend so much time in the hair salon and send his wife out to defend him publicly rather than speaking for himself, he would not provide such grist for Coulter's jibes.