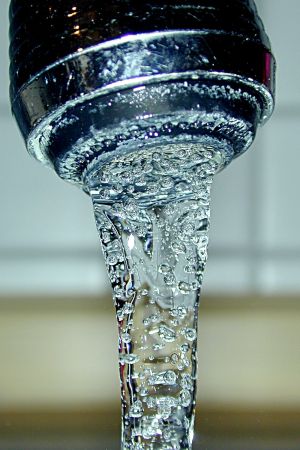 12 years ago I posted my thoughts on the building of Sydney's Desalination Plant in Kurnell. A few days ago, the NSW Government announced plans to double the size of the output. A doubling of its size was actually planned for when it was designed, so the cost will not be as great.

As a result, the expanded Kurnell Desalination Plant will be able to supply 30% of Sydney's water needs.

In my original article, I pondered the potential of switching over to desalinated water for all of Australia's needs, including agriculture. In the years since, I have learned that the total cost of such a venture would be very, very high. And yet in the face of Australia's worst drought on record and massive bushfires, the cost of not acting may be even higher.

Australia's agricultural heartland is located along the Murray / Darling / Murrumbidgee river areas. These rivers have provided irrigation water for over a century to farmers. Yet it appears as though these rivers will no longer be able to supply the water necessary - even the Murrumbidgee and its reliance upon the water diverted by the Snowy Mountains Scheme is finding it difficult.

The best desalination solution would involve a series of very large desalination plants built on the coast and close to the river systems. These areas would be the mouth of the Murray in South Australia and also the coastal areas of SE Queensland.

As with Kurnell and other Australian plants, these new plants will be built along with renewable energy plants to power them. Solar and Wind farms can be built in appropriate areas and connected to the grid. 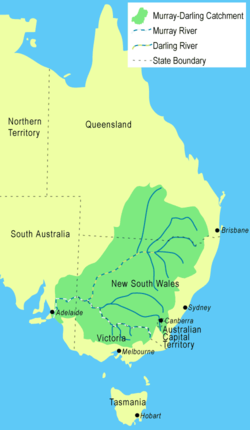 Snaking up from these huge desalination plants would be clean piped water, following the river systems through the current agricultural areas. These pipes would snake up the Murray from the Murray mouth, and along the Murray in Western NSW and the Murrumbidgee in the South of NSW. From SE Queensland, the pipes would be built along to the Southern Downs, where it would snake down various tributaries of the Darling such as the Barwon, and would connect up to the pipes from Murray mouth, creating a huge water grid accessible by farmers in SE and SW Queensland, Northern, Western, Southern and South Western NSW, Northern and Western Victoria, and Eastern South Australia.

With a 100% guarantee of water, farmers and farming communities would be assured of their future, along with an assurance of food production in a future where global warming will cause substantial drought all over the world. The presence of water will also allow for the growth of secondary industries and the growth of rural towns. It may be that people will flock to these areas for work, especially if world food prices grow.

Of course there will need to be common sense practices to accompany this. Irrigation water will be delivered through pipes rather than canals - the less evaporation the better. Steps must be taken to ensure that land degradation from salinity and inappropriate crops is minimised. It is also possible that farms in these areas would be covered to reduce transpiration from the crops and minimise insecticide usage.

One concern would be the output of brine from the desalination process. This is something that people have questioned for a while since large scale desalination plants first became operational. Would the brine create a high-salt, low oxygen dead zone around the outfall pipes, killing sealife?

What needs to be kept in mind here are two things. The first is the proportion of water used compared to the amount of water in the world's oceans. The second is the Water Cycle.

The amount of water in the sea is staggering. Compare the amount of water in the world's oceans to the amount of water humans need to survive and the result is, very, very, very large. If humans desalinated all their water needs, the impact it would have on the world's oceans is minimal. The outlet pipes of desalination plants do not release enough brine to poison the ocean - the brine mixes in with normal seawater and moves via currents and wind. The only concern would be if water from an enclosed salty body of water is desalinated - these would include the Dead Sea, the Aral Sea and the Caspian Sea.

The water cycle is also important here. Water, when used, doesn't disappear. Consuming water doesn't destroy it, it just changes form. The water we drink for our bodies to live is matched by the amount of water our bodies produce - sweating, urination, defecation and evaporated water from breathing. In the same way, water used in agriculture is exchanged - transpiration from plants and an increase in groundwater will occur from irrigation. In all these cases, the water we consume eventually makes its way back into the atmosphere and into the ocean.

The cost of creating a network of desalinated agriculture of the sort I have described above will be huge. The cost of building Kurnell was $1.8 Billion. The cost of building my proposal is likely to be over $1 Trillion. But over a build period of, say, 20-30 years, the costs will be manageable and affordable when compared the Australia's annual GDP (which is around $1.4 Trillion today).

In my 2008 article I mentioned the following:

"While spending 5-6 months in drought-stricken country NSW in 2006, I asked a number of farmers about water supply. "Would you", I asked, "be prepared to pay premium prices for water if its supply can be 100% guaranteed?" They all said yes."


I still believe that this is the case today.
Posted by One Salient Oversight at 13:58 No comments: