Ecuador wants a military base in Florida 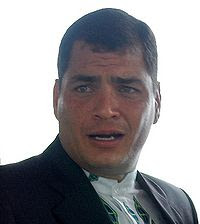 From the department of it-has-eventually-come-to-this:

Ecuador's leftist President Rafael Correa said Washington must let him open a military base in Miami if the United States wants to keep using an air base on Ecuador's Pacific coast.

Correa has refused to renew Washington's lease on the Manta air base, set to expire in 2009. U.S. officials say it is vital for counter-narcotics surveillance operations on Pacific drug-running routes.

"We'll renew the base on one condition: that they let us put a base in Miami -- an Ecuadorean base," Correa said in an interview during a trip to Italy.

"If there's no problem having foreign soldiers on a country's soil, surely they'll let us have an Ecuadorean base in the United States."

At some point we can also expect foreign nations operating inside America to capture and detain American citizens there, then take them out of the country for "questioning". After all, it's what America does to other nations.
Posted by One Salient Oversight at 19:27

I hope the Ecuadoreans stick to their statement to not renew the Manta lease. Of all the stupid uses of the military, this has to be right up near the top of the list.

However, the realist in me believes that Ecuador will give in when they get a scent of all those Yanqui dollars our government will inevitably wave in its face.