Revaluing the Yuan (and also the Yen) 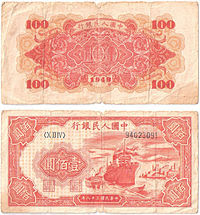 From the department of realignment:

Finance ministers from the G7 group of leading industrial countries have called on China to allow its currency to rise in value more quickly.

The G7 said it could also help reduce inflationary pressures in China because it would make imports cheaper.

The deputy governor of China's central bank said it was committed to gradual revaluation alongside economic reform.

But, added Wu Xiaoling, "moving the exchange rates in the absence of economic restructuring policies will hurt China".

In a statement issued after a meeting in Washington, the G7 also said their own economies remained fundamentally strong but there was an acknowledgement that oil prices and the US housing market are potential problems.

The reason it is not good is because both China and Japan have helped create a situation in which the United States runs a hefty current account deficit - nearly US$800 billion. One nation's deficit (US) is another nation's surplus (China and Japan). In order for the world economy to be put on an even keel, these hefty deficits and surpluses need to be made neutral. In other words, both China and Japan need to save less and spend more, while the United States needs to save more and spend less.

The world economy therefore needs the United States to consume less, and for China and Japan to consume more. This is more difficult than it sounds, though, since it needs a currency realignment - that is, the US Dollar needs to depreciate against the Yuan and the Yen.

China's Yuan is a "pegged" currency, which means that its value is set by the Chinese government. The Chinese government, which has been steadily industrialising the country for the past 25 years, set the Yuan quite low in order to make Chinese industrial products cheap and competitive. To prevent black-market trading between the Yuan and the US Dollar, the Chinese government has essentially ensured that large amounts of money are invested back into the United States. To put it simply, China is lending America the money it needs to purchase Chinese goods.

The Japanese Yen is not pegged, but the Japanese central bank has been buying up billions in US government bonds for some time. The practice is essentially the same as China - Japan lends America the money it needs to buy Japanese goods.

The governments of Japan and China have essentially entered into the Forex market and are major influencers in how it is run. The continual purchase of US bonds by the governments of China and Japan has meant that the US Dollar is overvalued while the Yuan and the Yen are undervalued.

If China and Japan are to increase their consumption of goods and services, then both the Yuan and the Yen need to appreciate in value. The first thing that both countries need to do is to stop buying US bonds. The second thing that needs to be done is for China to unpeg its currency and let the Yuan's price be set by the Forex market.

Of course it would be remiss of me to point out that the United States is not guiltless in this process either. It has been government policy for some time to have a strong dollar and to gear the US economy towards consumption over and above production. This has resulted in a large current account deficit which has, eventually, led to a plunging US dollar. The US could've quite easily chosen to rebalance things out by buying up Yen or other currencies but they chose not to. Even basic actions like refusing to sell bonds to the Chinese and Japanese governments were not thought up.

The US government's policy for years has been, quite simply, inflation.

It is, or should be, no surprise to anyone that the US dollar is now suffering one of its periodic falls. Anytime demand for a good has been met, yet supply continues to flood the market, the price required to clear the market will drop. I believe the dollar will continue to drop for some time.

I do not have any confidence the current Congress or administration are close to being serious about strengthening the dollar, particularly if it requires actual spending cuts.