What caused the Soviet Union to collapse?

I'm writing this as an adjunct to some fascinating study I did recently into the Soviet Union. It's not often I do historical studies here at my blog, but I think I have discovered the reason for the economic collapse of the Soviet Union in the late 1980s. This collapse, in turn, was followed by the collapse of Communism itself and a period of about ten years when Russia collapsed even further. David Christian, my Russian history lecturer at Macquarie University, mentioned that Russia lost about half of its Gross Domestic Product in this period.

At present I'm only going to focus on the economic issues involved. Gorbachev, when he instituted Glaznost, essentially created a monster that turned the Russian people against the Communist party. The collapse of communism in Russia itself may have been prevented had an economic collapse not preceded it.

What we need to remember is that in the years before communism collapsed, the Soviet economy collapsed. Economic output decreased alarmingly and inflation turned into hyperinflation.

The first inkling I had of this problem was when I looked at Russian/Soviet birth and death rates from this article at Wikipedia: 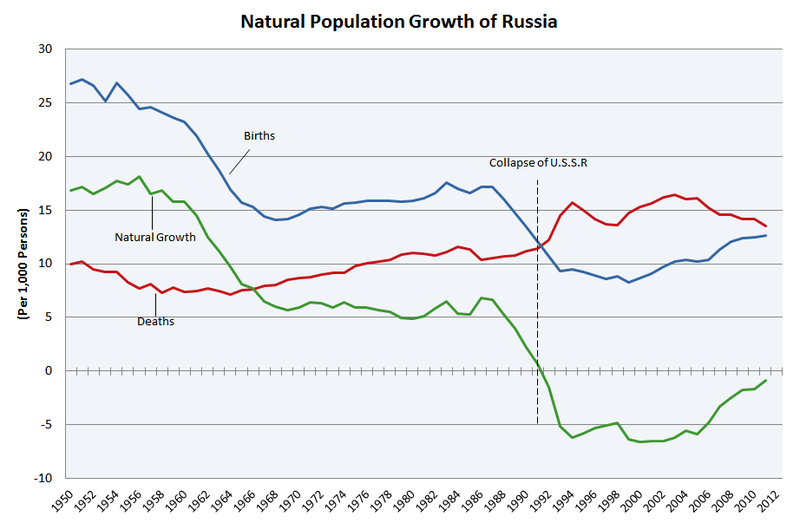 So the question is, why did birth rates drop so drastically from 1987 onwards?

Economic conditions do affect birth rates. Birth rates dropped considerably during the Great Depression. While a 1:1 causal relationship does not exist, a sudden change in birth rates are always the result of some change occurring in society. It's well proven that the experience of continual hardship amongst animals results in lower birth rates, and humans are actually no different in that regards.

So the seeds of destruction were sown in 1987. What happened?

I was inspired to write this article because I read the 1991 IMF working paper Forced Savings and Repressed Inflation in the Soviet Union by Carlo Cottarelli and Mario I. Blejer. In that article, written before the collapse of communism, the two authors analyse the economic situation of the Soviet Union in the 2nd half of the 1980s. Their conclusion was that the Soviet Union was experiencing what is known as Monetary Overhang, a peculiar economic situation experienced historically only by communist states. Monetary Overhang meant that there was not enough goods and services for the economy to purchase for the money available, which led to ever increasing levels of savings. This, in turn, led to hyperinflation. In a market economy, an overabundance of savings has a deflationary effect but in a communist command economy it has an inflationary effect. This is because the flow of money is not determined by a market made up of many independent actors, but by the determination of bureaucrats acting as part of central planning. This meant that as production dropped off, income remained the same. Enterprises that were producing less goods and services were still receiving government money and paying their employees their wages.

But enough of the monetary conditions - what was it that caused a drop in production? Something happened from 1987 onwards which led to Soviet Enterprises producing less goods and services - and not just a small drop, but a considerable drop which led to scarcity and social and economic hardship amongst ordinary Russians.

It is popular to assume that the collapse was due to Soviet inability to cope with American rearmament under Reagan. The idea behind this was that the Soviets increased military spending and military output whilst simultaneously reducing the production of consumer items and things such as food. Certainly there was an increase in military spending by the Soviets in response to Reagan's military spending increases, (edit 2017: this was actually not the case, see my follow up article) but such an increase in production would not have led to monetary overhang. This would be because any change in production (moving from consumer goods to military goods) would have had a neutral effect upon the money supply. Certainly if such a huge swing had occurred the Russian people would've suffered, but they would've suffered without the effects of a monetary overhang. The presence of a monetary overhang indicates beyond doubt that from 1987 onwards, the total production of goods and services in the Soviet Union dropped. Military spending may have increased, but total levels of production changed.

I believe the cause was due to an edict made by the Supreme Soviet of the Soviet Union in June 1987 - the Law on State Enterprise. Under the short reign of Yuri Andropov, the Supreme Soviet had been radically altered to include younger, more reform minded individuals. By 1987 and with Gorbachev leading the forefront of reform, a decision was made to further improve economic performance. In hindsight, this State Enterprise law caused a drop in production, an economic collapse and, subsequent to it, conditions ripe for another revolution.

I'll let Wikipedia say it for me:

The law stipulated that state enterprises were free to determine output levels based on demand from consumers and other enterprises. Enterprises had to fulfill state orders, but they could dispose of the remaining output as they saw fit. However, at the same time the state still held control over the means of production for these enterprises, thus limiting their ability to enact full-cost accountability. Enterprises bought input from suppliers at negotiated contract prices. Under the law, enterprises became self-financing; that is, they had to cover expenses (wages, taxes, supplies, and debt service) through revenues. No longer was the government to rescue unprofitable enterprises that could face bankruptcy.

From an economically liberal point of view you can see what the Supreme Soviet was trying to do: It was trying to use market forces as a way for enterprises to determine output and encourage surplus production. Moreover it would be assumed that these enterprises would have to, at the very least, be capable of paying its own expenses rather than having them covered by the state. Laudable, yes. But the reform was fatally flawed for one very good reason: prices were still determined by the state. As each enterprise began to reform itself to become more profitable, costs needed to be covered. Since it was likely that the enterprise could neither retrench its workers or reduce their pay, the only choice they had to become profitable was to spend less on purchases. This meant that enterprises, with no other solution available, were forced to buy less materials for their production. Because the law applied all over the Soviet Union, one enterprise's decision to stop buying goods resulted in a reduction in another enterprise's demand which, in turn, forced that enterprise to reduce supply even further. Obviously these enterprises were not even meeting targets set by the Supreme Soviet, which was problematic, but, forced to balance their own books (which was failing), Soviet industrial production entered what could be termed a negative feedback loop: any attempts to solve the problem ended up making it worse.

By 1991 the economy had collapsed. Conditions were ripe for a revolution, and one arrived. It's only been in the last few years that Russian household wealth has returned to pre-collapse levels.

What I have learned from this? Simple. An economy will experience inflationary decline whenever production drops before demand does. As a corollary, an economy will experience deflationary decline whenever demand drops before production does. My views on Monetary policy thus remain fixed upon the idea that stable prices are essential whatever condition the economy is in, and that other policy tools need to be used by governments to boost economic growth and/or reduce debt levels.

We can also assume that inflation will be the norm whenever supply problems in an economy persist, and will be experienced by Peak Oil, as well as food production once Climate Change begins to bite.

Additionally, you could argue quite easily that economic collapse can lead to political and social collapse.
Posted by One Salient Oversight at 12:27 3 comments: 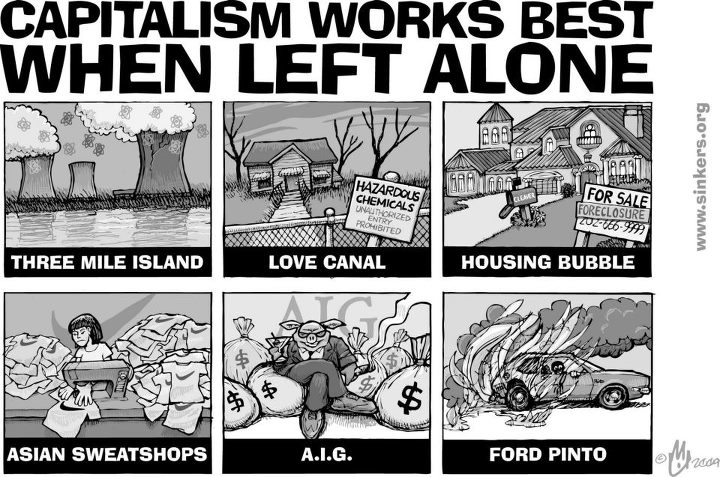 Of course the response to this from free market advocates is likely to be a rehash of what occurred in the Soviet Union, but such an argument misses the point, which is that good government is an essential and irreplaceable adjunct to an efficient and productive market economy, and that an efficient and productive market economy is an essential and irreplaceable adjunct to good government. Moreover, such a government should have some influence in the marketplace beyond simply the enforcement of legal limits, and should be involved directly in producing goods and services when necessary and when efficiency is superior to, and total cost of production is lower than, that provided by the market economy.

By all means let us complain about and seek reforms to both government and market, but let's not pretend that the only two options available are Minarchism or Communism. The argument has always been about how much power one sector should have over another. Arguing that one sector should be destroyed or reduced to slavery is the hallmark of radicalism.
Posted by One Salient Oversight at 11:05 1 comment: