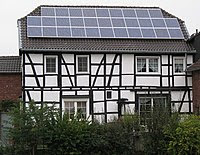 From the department of uncommon-sense:

Federal Labor has pledged to install solar panels in every primary and high school across Australia.

Opposition Leader Kevin Rudd says schools would be able to apply for $20,000 grants to install solar power, under the $489 million commitment.

He says the move would help to significantly cut greenhouse gas emissions.

"Then we'd be reducing by the equivalent of 2.8 tonnes, of CO2 equivalent for the year in question," he said.

But he says both parties will need to commit significantly more money before they will seriously address the problem of climate change.

"I'm hoping that this is an opening salvo and a whole range of other initiatives, so we look forward to those there," he said.

"In its own right it's an important step, and I guess what we'll need to do is just continue to assess the other policies."

It would interesting if Kevin Rudd follows through with this promise. $489 million is actually a lot of money and there are a lot of roofs out there that can be covered with solar panels.

It's a good move and a step in the right direction - but only a step.
Posted by One Salient Oversight at 16:29

Solar PV is a very efficient way of getting electricity into your appliances. It moves from your roof into your house, and there it is! But it don't work at night, it's mainly for reducing grid-demand during the day.

For baseload 24/7 power one needs a mix of solar thermal, wave, geothermal and hydro... topped up by high ERoEI wind when it's there. Sadly, even Labor's money doesn't get us off coal, yet. All it might do is prevent a new coal power station being built for a few years. I haven't done the figures, but I suspect this money would hardly meet the normal electricity demand GROWTH, let alone closing an existing power plant.

We need a big government, emergency wartime economy now to convert our inefficient oil based transport system into a much more efficient "electron economy" of solar-thermal trains and trams across the nation. Then we'll be free of oil shocks, energy independent, and have an infrastructure for the next generation (while solving our CO2 emissions as a side effect.)