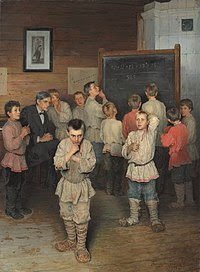 From the department of electricity-comes-from-this-wall-socket:

About 80 percent of those teachers said they spent less than an hour each week teaching science, according to researchers from the Lawrence Hall of Science at UC Berkeley and from WestEd, an education think tank based in San Francisco.

"It's alarming because it's a very short amount of time per week dedicated to a subject that's considered a core subject in schools," said Dorph, who is director of the Center for Research, Evaluation and Assessment at the Lawrence Hall of Science.

Understanding science helps children learn to think and solve problems while questioning the world around them, Dorph said.

There is also evidence that people who go into scientific fields generally learned to love science as children, she said.

-- About 16 percent of the elementary teachers said they spent no time on science at all. (Most taught at schools that had missed the reading and math benchmarks of No Child Left Behind and were trying to catch up.)

-- Most kindergarten to fifth-grade students typically had science instruction no more than twice a week.

-- Fewer than half of Bay Area fifth-graders (47 percent) scored at grade level or above on last spring's California Standards Test in science. (Only fifth-graders are tested in science at the elementary level.)

It's interesting to compare this situation with the NSW Department of Education Primary School Curriculum, which mandates around 1.5 to 2.5 hours per week studying science and technology, and allows room for more. Moreover, because Primary teachers have to hold a teaching degree in Primary Schooling, they have been trained in some aspects of science.

So while this report is concerning, it is not as bad as some might think.
Posted by One Salient Oversight at 11:10

This is the bit I focused on. I'm not sure about California, but in my state one does not have to have a degree or demonstrate any competence in the subject they are teaching, as long as they have the teaching certificate.

So, we have lots of people graduating with degrees in "education" who don't know much about anything, but are certified to teach in public schools. Whereas fully credentialed engineers and scientists may not teach in public schools without the teaching certificate. It is no surprise that few of them bother to take the extra year required to get one.