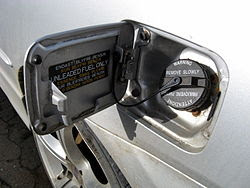 In 2007, collective eyebrows were raised around the US when a researcher made a link between leaded gasoline and crime. His argument was that the introduction of unleaded gasoline in the US in the early 1970s had the effect of reducing crime amongst present day adults who were born after leaded gasoline began to be removed. There was, he argued, a 20 year "lag" between the cessation of leaded gasoline and a lowering of the crime rate.

Naturally people (including me) were skeptical. Surely this was a classic case of "correlation does not mean causation". There was, however, something to it. The idea is that lead has been proven to cause all sorts of psychological problems in people who have ingested too much of it. What this researcher argued was that, in the days of leaded gasoline, children were exposed to higher amounts of lead, both in the atmosphere and on surfaces. Although the amount of exposure was small, it did cause some level of deformation in brain development, which meant that, when the children got older, they would more likely have behavioural difficulties and more likely to break the law and end up in jail. By removing lead from gasoline, children began to grow up with less brain deformation and were less likely to commit crime when they got older. In the United states, the phasing out of leaded gasoline took place in the early 1970s, which meant that US crime rates in the 1990s would've begun to fall. And this was so.

The 2007 New York Times article about this strange relationship can be found here.

Here in Australia, leaded petrol began to be phased out from about 1986 onwards. In the New York Times article, countries like Australia and the UK should begin to experience a drop in crime from about 2006 onwards.

Well it's taken some time, but a report out today shows that the NSW prison population has fallen by around 7% between July 2009 and December 2011.
Posted by One Salient Oversight at 12:09 2 comments: