My current understanding of the root of modern day Islamic Terrorism 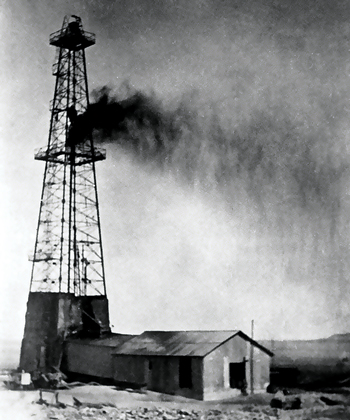 This is my current understanding of the root of modern day Islamic Terrorism:
Hundreds of years ago on the Arabian Peninsula, the new ruling family, the House of Saud, made an arrangement with the leading religious family, the Wahhabs: The Sauds would rule, while the Wahhabs were given power and influence to propagate their version of Islam, which is called Wahhabism today. This ultra-conservative version of Islam was derided and condemned over many years by mainstream Islamic teachers and scholars.
Fast-forward to 1948 and the Sauds still rule the Arabian Peninsula (a country known as Saudi Arabia) while the Wahhabis still have a huge influence over Islam in that country. While the world is shocked and awed by the formation of modern Israel, geologists discover the Ghawar Field in Eastern Saudi Arabia - the largest underground crude oil reservoir ever discovered. Subsequent discoveries around the Persian Gulf in neighbouring countries creates the Middle Eastern oil boom.
Now fast forward to 1973. The world's economy has depended upon cheap oil for decades but the Arabic nations have remained opposed to Israel in that time. After the Yom Kippur war ended in Israel's favour, oil producing Arab nations (as OPEC) embargoed oil deliveries to nations they believed were helping Israel, including the US and many other western countries. The high price of oil resulting from the embargo and its aftermath led to these countries becoming very rich - especially the ruling classes and especially the house of Saud.
Because of the close relationship between the house of Saud and the house of Wahab, many prominent government positions were handed out to members of these families. The Wahabs were still very conservative and very extremist in their religious beliefs and were still being criticised by more mainstream Islamic leaders.
One of the more prominent families in the Saudi world was, and remains, the Bin Laden family. The Bin Laden family received all sorts of juicy government contracts to construct buildings throughout Saudi Arabia. One of the members of this family was named Osama. Osama was influenced greatly by the extremist Wahhabism and began planning his terrorism program in the 1980s.
Other extremist Wahhabis began using their power and influence within the Saudi government to fund the building of Wahhabi mosques around the world, including in Western countries. This is still going on.
The 9/11 attacks were perpetrated by Saudi Wahhabists. They were funded by rich members of the Saudi government at its lower levels. The attacks were planned by the well-connected Osama Bin Laden - a man with both extremist religious views and practical business training and experience.
The years following 9/11 have seen an upswing in Islamic terrorism. Most of these terrorists have been influenced by Wahhabi teaching, found either online or in their mosque. The presence of the internet has allowed the Wahhabist message to spread to disaffected Muslims around the world, creating an environment where formal structures (ie a terrorist network) are not needed to create terrorists.
A summary of my conclusions - Modern Islamic terrorism:
* is mostly Sunni (as opposed to Shi'a)
* is sourced from Wahhabism, a powerful but not dominant religious ideology within Sunni Islam.
* is mainly Arabic in nationality, with exceptions due to Wahhabi influence (eg Jemaah Islamiyah in Indonesia)
* is funded by well-connected families in Saudi Arabia and members of the Saudi government.
* has been funded for decades from the profits of the Saudi oil industry being distributed to powerful Saudi families.
* is angry at "the west" for a) the creation of modern Israel, and b) past aggressions against Arabic nations from colonial times up until today (including British and American oil companies taking their oil, but also aggressions like invading Iraq).
* can influence individual Muslims through the internet.
* is NOT a natural outworking of the Islamic faith.
* does NOT have any historical precedent prior to 9/11.
* needs to be addressed by Western countries through directly challenging and influencing Saudi Arabia.
* is unlikely to be propagated in mosques that are not Wahhabist.
* is opposed by the majority of Muslims and the mosques they worship in.
Posted by One Salient Oversight at 17:36 3 comments: