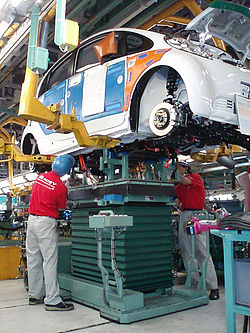 I've been doing some more thinking about Electric Vehicles and the battery technology that will drive it to eventually replace internal combustion cars.

In the previous article I pointed out that Electric Vehicle Battery Packs need to have an energy density of around 675 Watt-hours per kilogram (Wh/kg) if they are to have an equal range to today's petrol-powered cars. I also pointed out that the Nissan Leaf - the world's first truly mass-produced electric car - has a battery pack with an energy density of around 131.57 Wh/kg. This means that the Leaf only has an effective range of approximately 117km (72 miles). "Range Anxiety" is truly a problem for Leaf owners - even though the total cost of charging the Leaf is lower per kilometre than the cost of filling up regular cars with petrol (the equivalent fuel efficiency for the Nissan Leaf is 2.4 litres per 100 km - 99 miles per gallon).

As a result of this study, I've done some more number crunching - this time taking into consideration various different types of vehicle. The Nissan Leaf is essentially a "Compact Car" or "C-Segment" vehicle. The other electric car that is dominating the EV market is the Mitsubishi i-Miev. The i-Miev is different to the Leaf in that it is a "Subcompact" or "B Segment" vehicle (also known as a Kei Car). This means it has a smaller engine (47kw compared to 80kw in the Leaf) and is lighter (1080kg compared to 1521kg). Thus the cars can't really be compared.

So what I did was examine the various different types of cars and work out just how much battery density needs to increase before the range of that particular vehicle class can be effectively equaled by an EV.

The image from my spreadsheet is too large to post here, so click here to see it directly. I obviously need to explain it, so have it open in one tab while looking at this page and flick between them.

Each different column colour represents a vehicle class. We have Subcompact / B Segment all the way up to Full SUV / J Segment. In each of those columns I have also included a base vehicle to use by way of comparison. Since we recently bought a VW Caddy, I decided to stick pretty much with Volkswagens as far as possible, with the notable exception of the Australian Ford Falcon and Range Rover. Each of these vehicles is given a fuel economy figure in Litres per 100km (to convert to mpg, click here). I've also included the size of each fuel tank, in both litres and in weight, as well as in kilowatt hours of storage. The cars I used all had petrol, not diesel, engines.

Column B shows energy storage in Wh/kg. This assumes that, as technology improves, more and more power is able to be stored in an EV battery.

All those numbers from column 9 downwards, and from column D onwards, are the range (in kilometres) of each vehicle class according to the energy storage numbers in column B. The most important cell in this section, and the spreadsheet, is F19, showing 117km range at 131.57 Wh/kg for a compact car. This is the base figure for the Nissan Leaf that I mentioned above and in my previous post.

The important figures are shown there in bold. I'll dot point them here:
As you can see, it is obvious that 675 Wh/kg may be enough to completely control the Subcompact and Compact markets, but as soon as you take bigger vehicles into consideration, the energy density needs to be higher. And this shows how the market will react as time goes by: the smaller, lighter vehicles will become more dominated by EVs than the bigger, heavier vehicles.

I've also placed another figure to look at: the energy density needed for the vehicle to have a range of 1000km. This is an important figure (though arbitrary) that will affect EV design. If we assume, for example, that battery energy density reaches 1300 Wh/kg (and thus control the mid sized SUV market), what would happen to the subcompact market? Well according to the spreadsheet, such a vehicle would have a range of 1300km, more than twice what is probably needed. When this occurs, it is very likely that EVs will have less space dedicated to battery packs and more space dedicated to other aspects, such as greater boot space and leg room. Thus the cars will have an ever increasing usability.

This is not outside the realms of possibility. Think about the battery packs needed to power your mobile phone or laptop - they have been decreasing in size and increasing in energy intensity for some time. The same should be true for EV battery packs.

Now the second part of the graph needs some explanation. It is essentially the application of Moore's Law to battery technology in column B (column C is the multiplier for the spreadsheet, so ignore that unless you wish to check my figures - which you are welcome to). Moore's Law, in this case, assumes that battery energy density will double every two years. If we take this year (2011) to be the year when battery packs of 131.57 Wh/kg are currently available to the market (ie the battery packs for the Nissan Leaf), then you can see the sort of battery energy density that could be theoretically available as years go by.

...then we will see the following:

Now I don't really know too much about how the car market reacts to new vehicles and how long it takes for them to be taken up by the market, but it is probably likely that 2014-2016 will be the years when the electric car begins to hit world markets in number.
Posted by One Salient Oversight at 20:28 2 comments:

Battery technology is the key to EV Growth

In order for Electric Vehicles to enter the mainstream and compete equally with petroleum powered vehicles, battery technology must improve.

I consider the Nissan Leaf to be the one of the most important electric vehicles on the market today. Unlike the Prius or even the Volt, the Leaf is not a hybrid electric vehicle but a completely electric one. It is powered by an electric motor and energy is stored in the car's battery packs. The Leaf will not need to be "filled up" with petroleum, it needs to be plugged in to ensure that its rechargeable batteries have enough juice to keep the Leaf going.

The problem is that, while the cost of charging a car with electricity is very low compared to the cost of filling up a car with petroleum, the range of the Leaf is disconcertingly small. "Range anxiety" prevents many Leaf owners today from driving their vehicles beyond the normal commute. As a result it is more likely to be owned by people who already own petroleum powered cars that have greater range that they can use when needed. Nissan says that the Leaf's range is 160km but that is a very optimistic figure which does not take into account normal driving patterns: an "eco" mode ensures that acceleration is lower than it could be. In "normal" mode, and taking into account the need for air conditioning, heating, and music, the range of the Leaf is more likely to average out at 117km.

(Such normal driving patterns also lower the range of petroleum powered vehicles as well - it's just that we don't notice it too much because the car's range is still reasonably high).

After consulting the specs of my own comparable vehicle (A Mitsubishi Lancer) I have determined that modern cars need a range of around 600km. This would mean that, in order to properly compete, the Nissan Leaf's batteries would need to store 5.128205128 times more energy than it does currently.

And this is where the engineering challenges can be quantified.

The Automotive Energy Supply Corporation (AESC) is the company that builds the Battery Packs for the Nissan Leaf. Have a look at the specs on their product here.

From these specs we notice a number of things:
So in order for the Leaf to have a 600km range, each battery pack should store 2.56 Kw/h of energy, which means that the energy density of these battery packs must increase to approximately 675 Wh/kg (while assuming no increase in volume).

Of course battery technology is progressing in leaps and bounds - anyone who owns a mobile phone or laptop knows that storage capacity has improved considerably over the last five years. Nevertheless while the technology is moving forward, we need to remember that there is usually a lag between the technology being discovered and its ability to be mass produced at a reasonably low price.

I am quite confident that these technological and industrial goals can be met some time in the next 10-12 years.
Posted by One Salient Oversight at 22:48 No comments: