So in terms of the whole "Tax cuts increase tax revenue", it certainly didn't grow as fast as the rest of the economy. 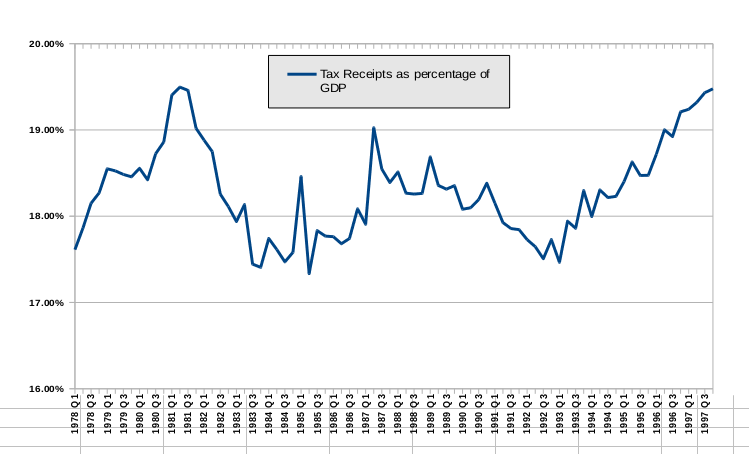 Posted by One Salient Oversight at 10:05 No comments:

US Manufacturing has plateaued in the last 4 years

This is from the OUTMS series from St Louis Fed. 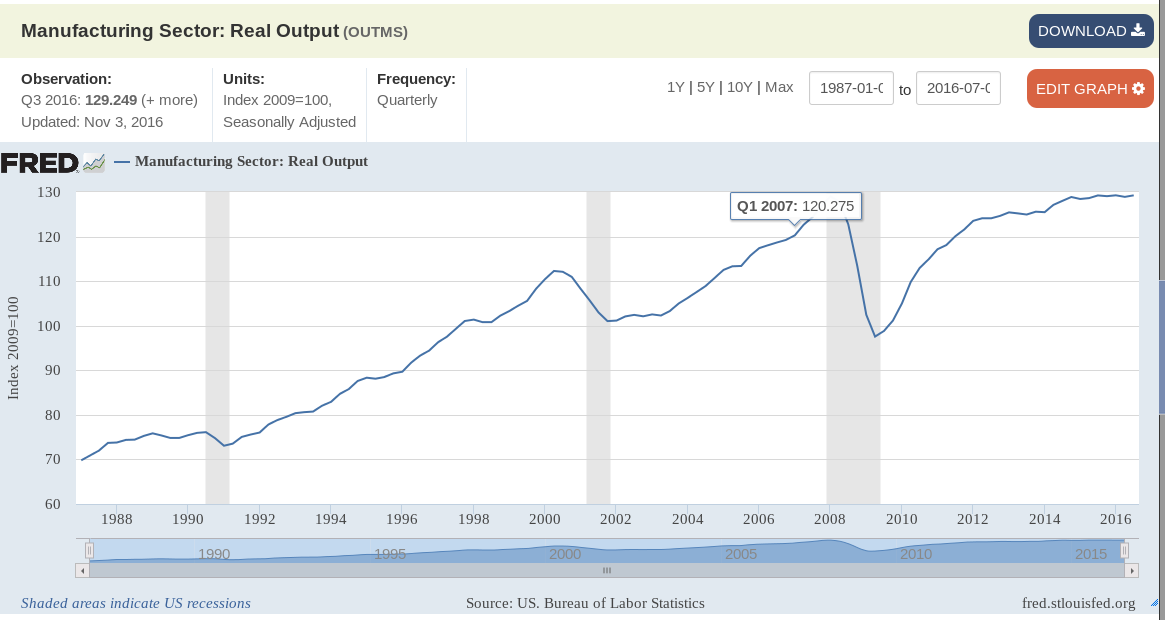 Posted by One Salient Oversight at 09:15 No comments:

There has been a long term deterioration in US Industrial production, as shown in the INDPRO index.

While monthly decreases happen all the time, a long-term decline in yearly production averages has been in place since September 2015.

When the yearly averages are placed on a graph and compared with US recessions since 1960, there is a clear correlation between long term industrial decline and recessions.

A decline in the yearly average can occur before a recession, or during a recession, as the graph below shows.

Note that I define a recession different to the NBER, but there is an overlap. 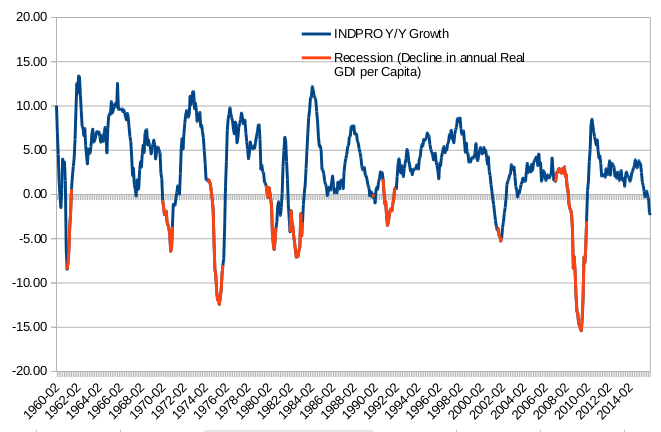 Here is how it appears on my spreadsheet: 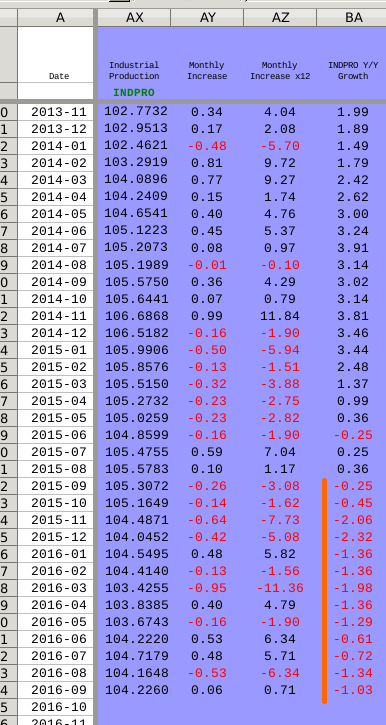 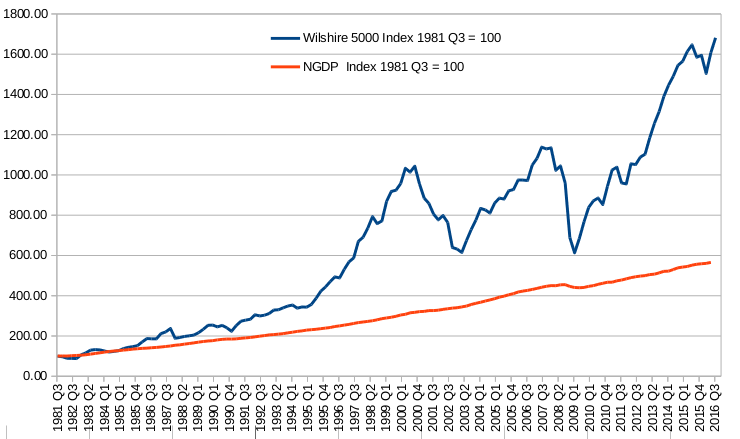 In theory, investment should multiply growth. But it's not. Not since the early 1980s.

The US Sharemarket has outperformed Gross Domestic Product for way too long. The result has been slower growth.
Posted by One Salient Oversight at 14:24 No comments:

Is it time for American Conservatives to embrace a different voting system? 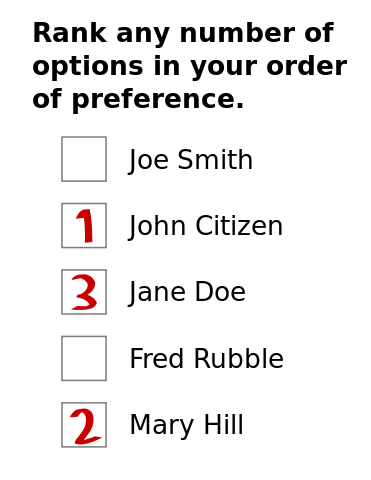 This is actually a very good time for American Conservatives to debate the issue of proportional representation and voting systems like "Instant Runoff Voting" (IRV). A "First Past the post" voting system ends up either forcing a two-person presidential election or the complete disenfranchising of a third candidate.

The classic example of this is the 1992 Presidential election in which Clinton and George H.W. Bush were joined by independent candidate Ross Perot. Despite gaining nearly 20% of the vote, Perot won none of the electoral votes. Moreover the people who voted for Perot were probably likely to have voted for Bush, which means that Clinton won the election because the opposition vote was divided. This is a natural result of a "first past the post" electoral system, which is not very democratic.

Had IRV been the voting system in 1992, the chances are that Perot's votes would have ended up being given to George Bush (since Perot voters would have nominated Bush instead of Clinton as their second choice), and Bush would have won.

Another election that would've changed is the 2000 election - it could be argued that votes for Ralph Nader would have gone to Gore (since Nader voters would've nominated Gore over Bush as their second choice).

In the current climate, IRV would create a viable alternative to Trump, so that conservative voters who hate Trump won't have to vote Democrat or choose not vote at all. One of the reasons why Trump presents a crisis to conservatives at the moment is because of the First past the post electroal system./

In short, the Instant Runoff Voting system is a far more democratic voting system than the one currently used. Both parties would have benefited from it in the past had certain elections been under IRV, which means that both parties could choose to get behind the system and nominate its use in presidential elections with a constitutional amendment.
Posted by One Salient Oversight at 15:20 1 comment:

There has always been a direct correlation between economic growth and the cost of energy: The cheaper the cost of energy, the greater the economic growth. While it is true that low oil prices will negatively affect companies that deal directly in them, the opposite is true for the rest of the economy. If the price of oil remains low for the next few years, there will inevitably be an increase in economic growth throughout the world. This is because there is a "ripple" effect whereby lower oil prices translate into cheaper goods and services - cheaper transport costs a) allow producers to sell their goods at a higher profit margin, and b) allow consumers to have more disposable income left after purchasing them. In short, cheap energy (which means plentiful energy in reality), is a win-win for the entire economy.

As for the "debt supercycle", I am getting more and more convinced that the economy is actually about goods and services that people and businesses produce and consume. Debt and money are simply numbers which affect how much a person/business/government can purchase or produce something. If there is cheap and plentiful energy available to an economy, the numbers involving debt and money will tend to balance each other out more quickly. Prior to the 1980s and the birth of neoliberalism, sharemarkets and debt markets grew at the same pace as, if not lower than, economic performance. This changed from 1981 onwards, as nations began cutting taxes on high income earners and businesses in the hope that this would spur investment. It did spur some investment, but over the long term all it did was create a huge bubble of debt existing alongside skyrocketing sharemarket indices (like the Dow Jones). Flush with massive amounts of cash, the rich and the corporations made money and profit simply through a debt/sharemarket/property balloon. Unlike previous generations, in which what went up went back down, monetary policy (interest rates) was able to simultaneously stop any crash and keep the bubble expanding. Instead of popping, the investment balloon remained and still remains very big. What has changed is that the economy has slowed down. A pre-1981 economic system, in which taxes on the rich and corporations remain high and significant economic resources are transferred to ordinary people, will result in higher economic growth (alongside lower debt levels, lower property prices and lower share market indices).

The Energy part of the equation here is important because obviously a market economy that is dependent upon fossil fuels is more likely to experience peaks and troughs as oil levels move from plentiful to scarce. If the world economy was a game, and if global warming did not exist, it would be far better to pump out oil continually at a pace beyond demand, ensuring that a large reservoir of ready-to-refine oil exists above ground rather than below it, and by doing so keep energy flowing into the economy at a stable pace. But because energy is in the hands of market forces, this doesn't happen.
Posted by One Salient Oversight at 12:41 1 comment:

With a lot of focus on the potential for another recession, I thought I'd post some thoughts, as well as some graphs from various spreadsheets that I have kept going during my current absence.

Since interest rates have been so low for so long, one standard method of recession prediction - an inversion of the yield curve - has become problematic. As a result I decided a while back to keep tabs on inflation-indexed securities (since these incorporate negative interest rates). When you compare the curve between 5-year, 7-year, 10-year and 20-year inflation indexed securities, the current situation is: 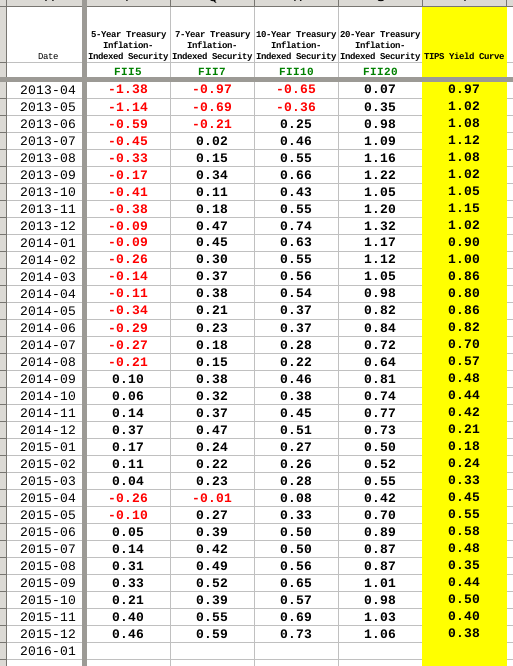 The "TIIPS Yield Curve" column in yellow is just the average difference between the 5 & 7, 7 & 10 and 10 &20. Since Inflation adjusted bonds have only recently been added to Fred at St Louis Fed, there isn't much history to go on. The history does, fortunately, encompass pre-2008 data:

This data shows an inverted yield curve occurring in late 2006, which indicated the recession on the way.

In short, the current yield curve data does not show any oncoming recession... yet.

A few years ago I created the idea of a "Net Monetary Base", by which the Excess Reserves are taken away from the Monetary Base. The idea being that excess reserves have the same function as money taken out of circulation (and are thus deflationary). This was recognised back during the Depression as part of the 1933 Banking Act, one of the policies being an enforced reduction in commercial bank excess reserves. After the passing of this act, prices began rising after being in decline since 1929. Post-2008, no comparable law was passed, allowing banks to hold excess reserves and probably prolonging the "long recession" (which I think is what it is being called now).

(Of course I have not done any major statistical analysis of this data. I'll leave that for the statistical experts who can prove me right or wrong later on).

So what of this data? What is it showing? Here is a screenshot of my spreadsheet: 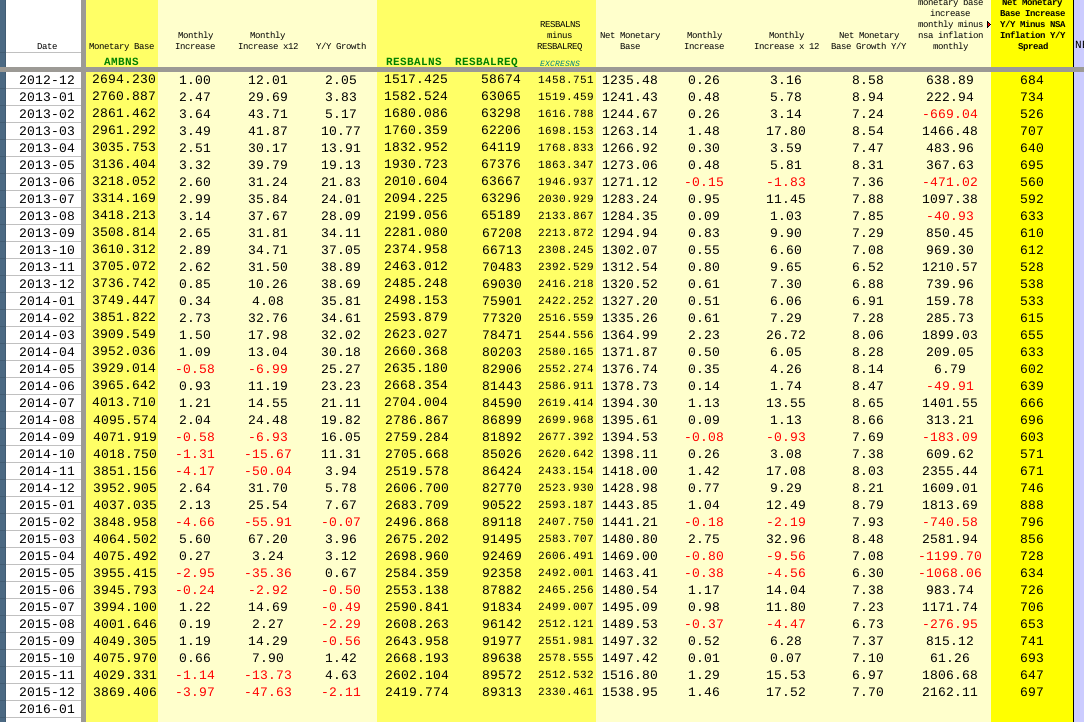 It is the far left column that is important. If it is negative, it indicates an oncoming recession. At the moment it isn't. Compare this to 2005, which showed a recession was coming: 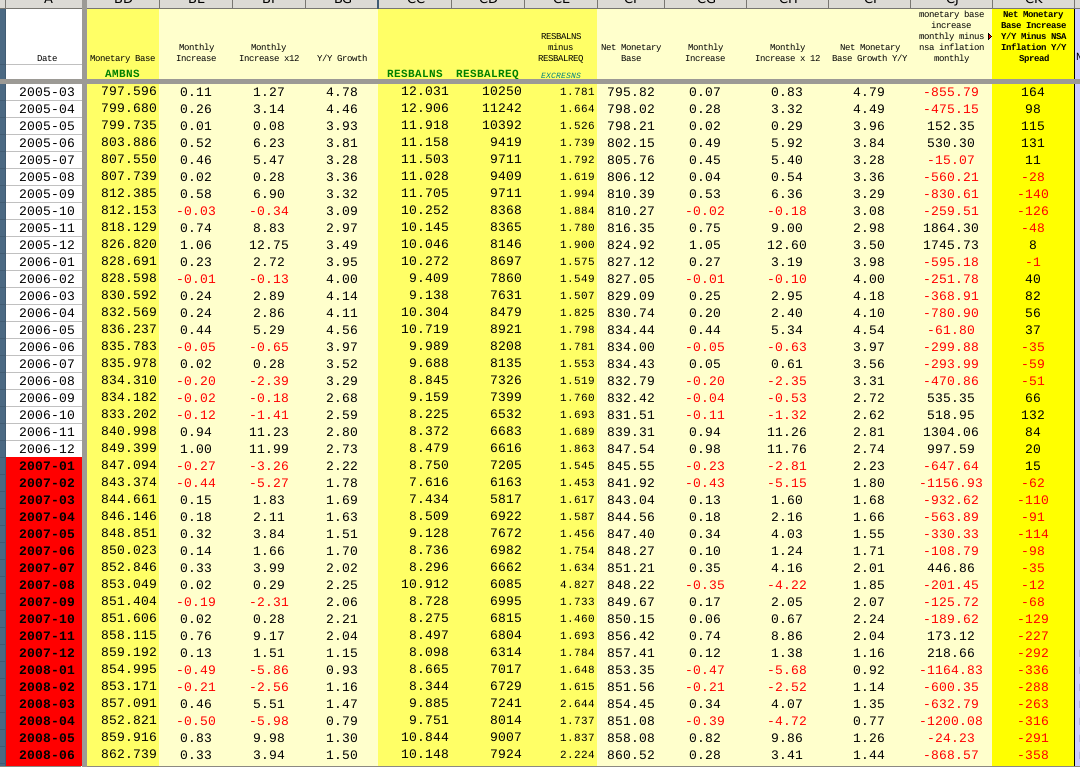 Put all my data into a graph, and it looks like this:

In short, the data does not suggest a recession yet.


Posted by One Salient Oversight at 11:39 No comments: