Proof that Country Music should be eliminated 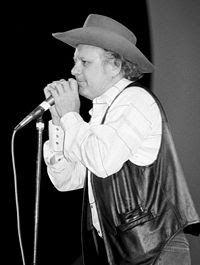 According to the authors, Steven Stack and Jim Gundlach, the paper "assesses the link between country music and metropolitan suicide rates. Country music is hypothesized to nurture a suicidal mood through its concerns with problems common in the suicidal population, such as marital discord, alcohol abuse, and alienation from work. The results of a multiple regression analysis of 49 metropolitan areas show that the greater the airtime devoted to country music, the greater the white suicide rate. The effect is independent of divorce, southernness, poverty, and gun availability. The existence of a country music subculture is thought to reinforce the link between country music and suicide. Our model explains 51% of the variance in urban white suicide rates." The paper can be found online.

My advice to people - just don't listen. Get into heavy metal or grunge or shoegazing instead.
Posted by One Salient Oversight at 21:04

Might I heartily recommend jazz or even blues? Good, live jazz is exhilirating.

So true - I listen to them and wonder WHY

or following on from BL
Satchmo

those notes and trills


Great ringtones collection for phones
Does your phone have good and attractive ringtones? Today I will introduce you the best new ringtones. You can listen to download your phone!

There are also many other ringtones, you can see more at the homepage: https://bestringtonesfree.net/

Well i like your high quality blog site design plus your posting abilities. Keep doing it. Please visit our site instastalker