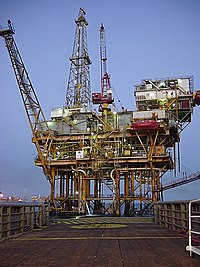 From the department of unreliable reporting:

The cost of oil is still below the inflation-adjusted level of about $90 a barrel seen in 1980, when spiralling prices helped contribute to a recession in the US. - BBC 17 October.

Posted by One Salient Oversight at 23:20

Hi Neil,
I'll look into it but I have a few comments.

I think comparing the 1970's oil price with today's is more the domain of economists — who can compare the inflation rates with the recent devaluing of the American dollar. However, as such it is subject to the vagaries of the economic paradigm of the observer. So a Keynesian might underestimate the inflationary effects of Beranke's recent interest rate cuts, while a gold standard economist might have a bias towards over-estimating the devaluation, pushing 1970's price comparisons either down or up comparative to today.

While TOD might be one of the best peak oil forums on the net, as an economic argument maybe there is dome room for differences in estimate between $90 and $101? Who really cares? We are not looking for milestones such as, "See, now we are in a 1970's oil crisis because the price is the same" because that's quite an artificial comparison.

Even if we figured out the point at which the price became identical to the 1970's oil price to the exact cent, it would still not mean much. We have a completely different world economy today. Some things are better, with less of the American GDP dependent on oil for each unit of production. Some things are worse, in that we live in a far more globalized economy, with "Just in time" delivery an important feature of the 4000 mile production line.

As you have previously pointed out, today's prices are artificially created by a devalued American dollar. The "real" price of oil as determined by the geology of supply and world demand is probably back just under $70 a barrel. Ben Bernanke devalued the dollar, so while the price rises in America, it does not hurt the whole world economy as much because the American dollar doesn't mean as much to buy oil in. It works out roughly the same.

Throw in a crisis between Turkey and Iraq, and the price climbs. This is geopolitics and bad monetary policy creating inflation in the US, not geology.

What IS important is that people will start to notice the high price of oil and think, "Heck, maybe those peakniks are right" and start googling peak oil a little more, and seeing the evidence. I'm fairly agnostic about which year the peak hits, and take more of a Queensland Parliament point of view... sometime soon. My main concern has always been that:-
1/ The final oil crisis is coming
2/ Politicians and markets are acting like it's not
3/ We are wasting billions upgrading highways when we should be rebuilding trains and trams
4/ The peak is not important, the current price is not important, it's the vision of permanent decline that is important with oil rationing, infrastructure challenges, even lines of food supply under threat.
5/ So much of the economic pain that is coming was utterly preventable if groups like ABARE had been a little bit more aware of the geology. As 4 Corners last year highlighted, ABARE estimated all their prices based on silly virtual market extrapolations. When asked if they had factored in the GEOLOGY of peak oil, the previous head of ABARE simply stated, "Ummm, no, because no one asked us to."

They forgot to evaluate the "Supply" in "Supply and Demand" when estimating future prices. In other words, "The dog ate my homework".