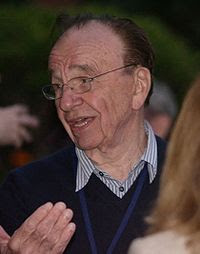 From the department of Up-is-down:

A Father has been cleared of murdering his three young sons after they tragically drowned when his car plunged into a dam.

A Supreme Court jury has just found Robert Donald William Farquharson, 38, not guilty of murder in the wake of one of Victoria's most heart-wrenching trials.

But wait, there's a subtle twist to this:

The jury in the murder trial of Robert Farquharson has found him guilty of three counts of murder.

Farquharson, 38, was charged with the drowning murder of his three sons, 10-year-old Jai, seven-year-old Tyler and two-year-old Bailey, who died when the car he was driving ran into a dam at Winchelsea, near Geelong, in 2005.

Update:
Yeah, yeah, it was probably a mistake. They had two stories ready to go and accidentally published both. So they weren't stupid really... just unprofessional in handling important news stories.
Posted by One Salient Oversight at 16:32

Oh No! Was it in the print version?

A FATHER has been found guilty of deliberately driving into a dam to murder his three helpless young sons. etc

If you search their site for his name - your link is still there with the WRONG summary but of course goes nowhere. hard to hide stuff on internet.