Generals of the Civil War 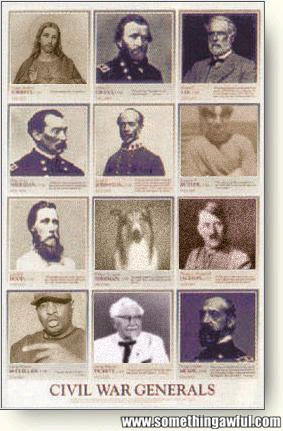 This photoshopped image has been shamelessly stolen from Something Awful.
Posted by One Salient Oversight at 13:03

tad diff to recognise them all

I think the ninth is not civil war ie 3rd down on right - reminds me of bunker - which would mean Bunker Hill in the War of Independence (UK name).

The one in the white suit could be the famous KY Chicken Run campaign. And the one above from the big retreat known as the Sheep Run.

BTW my fav computer game is RIFLES which is mostly Civil War battles.
With some other 19th century stuffups. I actually nearly beat the Zulus. It needs a DOS or Win98 machine - it will run slowly in DOSBOX - I did try Ubuntu but the Dos intro was difficult. It is around for free download if you have the hardware.

I'm officially a nerd. I can name all the men pictured who were actually Civil War generals.