Three months ago I posted an blog article about how there is not currently a collapse in food production. Since then, the FAO has updated their figures, including figures going back to 1981. The updated historical figures haven't changed the graph much, but there is a noticeable dip in the last two years: 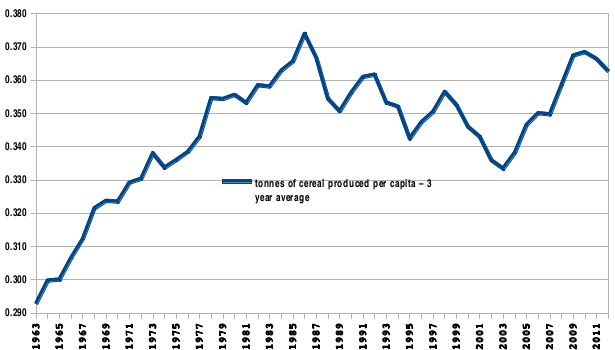 Note here that the measurement I'm using is the total amount of grains produced per capita. The reason for taking world population into account is to see whether supply (of food) is matching demand (the amount of people who need food). The FAO have pointed out a few times that more grain than ever was produced in 2011, and that is true. However, in terms of grain produced per capita, nothing has yet exceeded the 1984-1986 period. We came close in recent years (as the graph shows), but it has not been sustained.

As I pointed out in the previous post, the most obvious part of the graph is the 1963-1985 period, which was when food production consistently outstripped population growth. This was known as the Green Revolution. Since the mid 1980s, however, there was a downward trend, which picked up again in 2003 and has just recently peaked.

There's no doubt that per capita production has dropped in the last few years - I use a three year average that evens out the effects of good and bad years - but grain production is still quite high, per capita.

Many have been saying that a collapse in food production is around the corner. The graph doesn't reflect this situation. Of course there might be a sudden drop in production currently underway but the FAO's estimations have not reflected a massive drop, simply a drop.

One issue at hand is food prices - what is causing the price of food to increase? As I pointed out in my previous post, high food prices might simply reflect high inflation generally and the state of the economy that these prices are being experienced in. Nevertheless one potential reason could be that some parts of the world are consuming more per capita (eg China), leaving other countries with less food - something that the graph above does not highlight.