Which Celebrity has let me down the most? Bono.

(This is a copy and paste of what I wrote on Reddit:)

I'm 49. I was a U2 fan before Joshua Tree came out. U2's music in the 80s was very different from the mainstream pop. They sang about important things. Bono used his position to fight issues like racism, hunger and war. Then, when the 90s came around, they effectively re-invented their musical style. They also poked fun at themselves.

I have the U2 Time magazine in a box somewhere, along with newspaper articles and vinyl records and singles from the time. They were my favourite band.

But there were three things which made me lose my respect from Bono and U2. This has resulted in me no longer listening to them and feeling very let down.

The first was the Iraq War.

U2 wrote a song called "Bullet the Blue Sky" in which they criticised US involvement in Nicaragua in the 1980s. The song even got banned from US radio. But by the time of the Iraq War, U2 were reaping considerable rewards from being a mainstream musical act. They could have used their power and influence to oppose the war. It would have lost them fans and money, and the right wing media would have excoriated them, but it would have meant that they were consistent to their principles. But what happened? They remained silent. Bono even went to the White House and shook hands with Bush. Meanwhile The Dixie Chicks stood up for what was right and were the musicians that took the brunt of right wing anger. And then when it came out that the US was torturing people in CIA secret prisons and in Abu Ghraib prison, did U2, supporter of Amnesty International and writer of "Mothers of the Disappeared" do anything? No. For me, this was the loss of U2's moral authority.

The second thing that happened was the U2 Tower.

Yeah, you read that right. Property developers in Dublin approached U2 with plans to create the tallest skyscraper in Ireland. At the top of the building would be a "pod" where U2 would live and record music. Of course the building was never built - the global financial crisis killed off those plans. But U2 acquiesced to the original plans and provided some investment.

The third thing was their failure to pay taxes.

After the GFC Ireland was in a mess. Unemployment was massive and the government had a huge budget deficit. The government decided to cut spending on welfare and thus the people who were hit the worst were the poor. U2 had stashed a lot of its earnings in overseas accounts and investments - completely legal but it was the sort of thing that a lot of rich people had done. As a result, U2 were not paying in tax what they should've been paying. Of course Ireland's fiscal nightmare wouldn't have been solved by U2 paying more tax, but it was the ethics of the situation that mattered. By keeping their earnings away from the taxman, U2 were part of the problem rather than being a solution - and the people who suffered from this problem were the poor, the very people that U2 had spent its life publicly championing. U2's manager, Paul McGuinness, defended the actions of the band, first arguing that it was legal (which it was, but that's not the point), before then launching into what I call the "CEO defence", namely that he spent time saying how wonderful U2 was to the economy and how many people were employed by them over the years, which was just another way of saying "you peasants should be grateful".

Most Irish people think U2 are a bunch of prats. I agree. They, especially Bono, are hypocrites, the worst sort of self-serving celebrity social champions.
Posted by One Salient Oversight at 13:09 1 comment: 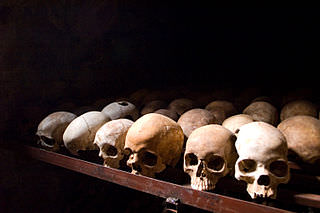 As this week’s end, it seems likely that it is quite near time for killing those involved in the multiple and clearly delineated attempts to stage a coup d’état against the legitimately elected Trump government and thereby kill our republic.

American patriots have so far, praise God, been remarkably disciplined in not responding to tyranny and violence with violence. For now they must remain so, armed but steady. But the time for such patience is fast slipping away; indeed, that patience is quickly becoming an obviously rank and self-destructive foolishness. If Trump does not act soon to erase the above noted tyranny and tyrants, the armed citizenry must step in and eliminate them.

It is, of course, far better if Trump does so, and I pray and believe he will. That said, the sheer, nay, utter joy and satisfaction to be derived from beholding great piles of dead U.S.-citizen tyrants is not one that will be missed if Trump does not soon do the necessary to save the republic.