US Defense Spending, and Trump's increase

The US military is already the world's most powerful fighting force and the United States spends far more than any other country on defence. Defence spending in the most recent fiscal year was $US584 billion ($759 billion), according to the Congressional Budget Office, so Mr Trump's planned $US54 billion ($70 billion) increase would be a rise of 9.2 per cent. In a speech to conservative activists on Friday, Mr Trump promised "one of the greatest military build-ups in American history".


Yes, an increase of 9.2% is substantial as a percentage. But how big would it be compared to previous years? The following graph is based upon two FRED sources, FDEFX and GDP. 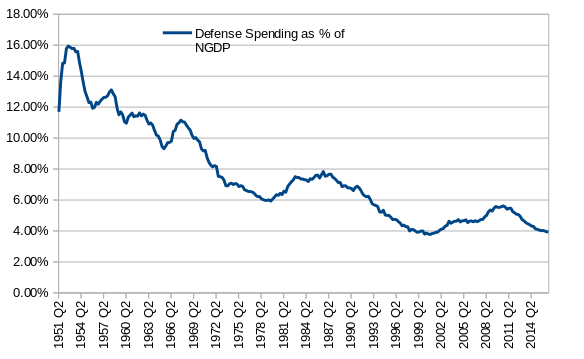 In fact the latest figures show that defense spending has decreased to 3.88% of GDP, which is the lowest recorded since 2000 Q4 (3.77% of GDP, the lowest since 1951). An increase of 9.2% would, (using a quick and simple equation) result in defense spending at 4.237% of GDP. The last time that was reached was 2014 Q3, which isn't so long ago. Of course such an equation is not very accurate when multiple quarters over many years are taken into account, but what is seen here is not a huge increase, and is still significantly lower than other periods in history.

Of course there's always the chance that Trump and Congress will make further increases in the future. But for the majority of us in the "reality based community" would still question the need for such an increase. What foreign power is threatening enough to demand such an increase in defense spending?

If defense spending remained the same proportion of GDP as it is now (3.9% to 4.1% of GDP), America would be safe enough. The risk of being attacked by a substantial foreign power is probably the lowest in history, and the risk that America's allies face is the lowest in history. The threat posed by IS and other Islamic terrorist organisations needs to be kept in perspective, namely that they pose not even one tenth of the threat posed by the Soviet Union during the Cold War.

Moreover the increase in defense spending may presage a future military campaign. But against who? Is increasing spending on defense simply the fulfillment of an election promise or is there something more substantial in the president's mind?
Posted by One Salient Oversight at 12:27 No comments:

Japan: GDP vs Energy Use

I found this interesting graph on Wikipedia: 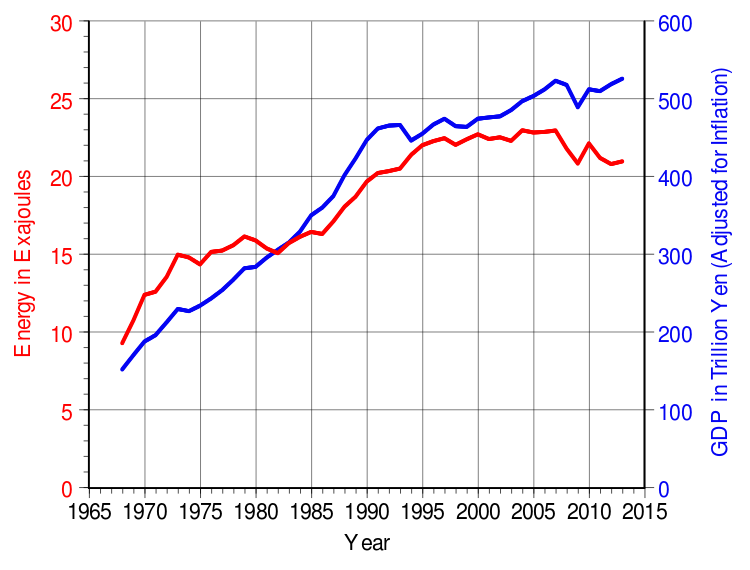 What it shows is empirical evidence that GDP and energy use don't always have to follow one another. Of course there is a relationship between the two, but what the graph shows is that it is possible for GDP to continue growing without necessarily increasing energy use. Graph is here.
Posted by One Salient Oversight at 12:44 1 comment: