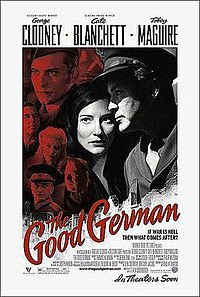 As the commentator at imdb said, "as with Solaris, it just doesn't pay off."

The Good German is a film by acclaimed director Steven Soderbergh. Soderbergh is a reasonably respected director who mixes up "arty" films (Bubble, Full Frontal) with profitable mainstream ones (Oceans Eleven, Twelve and Thirteen, Erin Brockovich).

The film is a recreation of the film noir style of the 1940s and is filmed in black and white. Moreover, the technology used in the production process, such as lighting and sound, was of 1940s vintage. In many ways the film is a homage to Casablanca, complete with an awkward relationship between the male lead (Clooney) and the female lead (Blanchett) who is married to an idealist being tracked down by hidden powers. There's even a dark airport with a DC-10 at the end of the film, such is the Casablanca influence.

The Production Code that influenced (or beset) the film industry at that time prevented films from displaying overt violence, swearing and nudity. The Good German manages to include all three, including a scene where Tobey Maguire punches Cate Blanchett in the stomach in an alleyway - hardly the sort of thing you'd expect to see in a 1940s style film.

But while Casablanca clearly portrays the Nazis as the hidden powers trying to grab the good guys, in The Good German it harder to discern. Set in Berlin in the months following the fall of Germany, The Good German recreates the chaos, the opportunities and the terror in the city as the allied powers (Britain, America and Russia) meet in Potsdam to determine the future of Europe.

Clooney plays Jake Geismar, a war correspondent who has been sent to cover the Potsdam conference. His official army driver is Corporal Tully, played by Tobey Maguire, who is involved in the growing black-market economy in post-war Berlin. Tully has a girlfriend, a German woman named Lena Brandt, played by Cate Blanchett, who is desperate to escape Berlin... but not to Russia.

The film incorporates an investigation into Nazi war crimes, and includes a character who was subjected to human experimentation, as well as insights into the German rocket program and the Mittelbau-Dora concentration camp. The moving of German scientists to America for rocket research, Operation Paperclip, is also mentioned.

Yet despite all this the film is somewhat hollow. It is all very well to use the technology of 1940s film-making and incorporate it in a film-noir style, but adding modern day sex, violence and swearing only takes away from the film, rather than adding to it. As I watched the film I tried to put myself in the place of a 1946 movie goer to see what would shock me or interest me. Apart from the sex, violence (including blood) and swearing, I would also be shocked by the film's "cleanness". Modern film-making, with its digital cameras and CGI special effects, amongst others, is very distinct from films made sixty years ago or more.

Remember when you saw Forrest Gump the first time and saw him bumble around in front of real footage of Lyndon Johnston? We all laughed at the marvels of modern technology, but after a while we were able to discern and identify attempts to "age" modern film into the past. The same can be said with The Good German. Casablanca, a film I have seen and respect (but not love), has imperfections and limitations of sound and technology that become part and parcel of films that were actually made during that era. The Good German, however, is just too clean. There's a "freshness" to the way the film looks, even though it incorporates darkness. Casablanca, and other films of that period, have what I would describe as a murkiness that is missing in The Good German.

I think it may have to do with the actual film used, and the way film has aged. In The Good German, there are very sharply defined lines between objects that are dark and light. For example, George Clooney's face against a dark background shows a sharp contrast between the face and the dark. Pores can be seen on Clooney's skin. But in films from that period the contrast between these two objects, while stark, is not so clearly defined. There is a "muddiness" or "slightly out of focus" feel in films from that era that just isn't there in Soderbergh's film.

As regards to sex and violence, I have always believed that it is far more effective to understate these aspects of a film story and give the audience enough information to make their own minds up. In Casablanca, the sexual tension between Humphey Bogart's character and Ingrid Bergman's character is obvious, as is the bind they are both in when it is revealed that she has a husband. This portrayal was, to put it mildly, quite scandalous in nature for audiences in 1942, but the film was able to communicate this without showing anything untoward. By contrast, Cate Blanchett's character comes across less a Femme Fatale and more of Hooker with a (frozen) Heart of Gold. Soderbergh's movie could have been better without the sex, nudity and violence. In fact, George Clooney gets beaten up and bloodied so many times in the film that it becomes unintentionally funny.

The film is, like many Hollywood releases, professional, well organised yet soulless. Like many of Soderbergh's "arty" films, it is not arty enough to please art-film fans (like myself) and yet not mainstream enough to please the box-office. Soderbergh seems to be trapped in some sort of "no man's land" between mainstream success and critical acclaim. He obviously doesn't want to end up becoming a Hollywood whore like Michael Bay, but can't seem to get to the point where people see him as an auteur worth following. It's almost like he is a robot that has been programmed to create arty-films.

This work is licensed under a Creative Commons Attribution 3.0 License.

Posted by One Salient Oversight at 15:52

As regards to sex and violence, I have always believed that it is far more effective to understate these aspects of a film story and give the audience enough information to make their own minds up.

This approach to films portrays not just the hollowness of this film or the film industry, it portrays the hollowness in the souls of most of the people involved in film-making.
As Neil mentioned, this film is derivative. Soderbergh or Clooney would probably say it is an homage, but they are fooling themselves. Frankly put, Hollywood can't tell stories anymore, or at least with any consistency.

An American songwriter - perhaps it was Jerome Kern - once said, "It is difficult to say 'I love you' without actually saying it." Yet the great love songs all do just that. Modern films can't tell stories any more without resorting to profanity, violence, nudity or technical effects. In fact, those things have in many, many cases, become the story at the expense of that elusive thing called "plot".