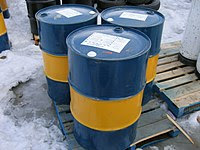 From the Oil Drum: 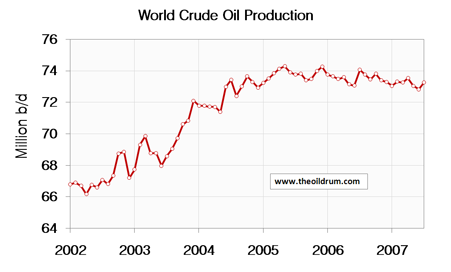 The "market" is made up of people throwing billions upon billion of dollars around, yet they have no knowledge of these statistics. Peak Oil will be a classic example of "Market failure" in the economics textbooks of the future. Had oil been priced appropriately these past 5-10 years by an informed market, the negative effects of such a correction would have been easier to bear and alternatives would have been sought by the market to mitigate the coming peak. Why was the market blind to this? There are many reasons, but the major one is that markets do not always make decisions based upon rational thinking - even markets that have trillions of dollars at their disposal.

As Bill Paxton said in Aliens: "Game Over Man!"
Posted by One Salient Oversight at 23:36

Hi Neil,
the difference of 10 mbd between the first and second paragraphs of this "The Oil Drum" quote at first confused me, then I remembered the history of the measurement we call the "Oil Barrel".

(You'd think the "debate" over peak oil would be over if the world had dropped 10 MILLION barrels a day from the mid 80's back to 74 mbd!)

Someone at TOD must have been speaking in the second, larger barrel terms of "Standard Oil"... but this is a bit silly because although the second barrel of Standard Oil was larger, the world remains on the original historical barrel as it's term of measurement.... most oil is shipped in tankers anyway, not barrels!

The standard barrel of crude oil or other petroleum product (abbreviated bbl) is 42 US gallons (about 35 Imperial gallons or 159 L). This measurement originated in the early Pennsylvania oil fields, and permitted both British and American merchants to refer to the same unit, which was based on the old English wine measure, the tierce.

Earlier, another size of whiskey barrel was once the most common size; this was the 40 US-gallon (151.4 litres) barrel for proof spirits, which was of the same volume as 5 US bushels. However, by 1866 the oil barrel was standardized at 42 US-gallons.

Oil has not been shipped in barrels for a long time [4] since the introduction of oil tanker ships, but the 42-US-gallon size is still used as a unit for measurement, pricing, and in tax and regulatory codes, each 42-US-gallon barrel making about 19½ gallons of gasoline.[citation needed]