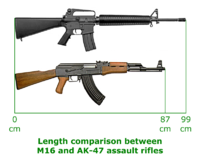 According to the unbiased and completely objective news service Al Jazeera, the AK-47 kills around 250,000 people per year and is "the real weapon of mass destruction".

The Soviet designed AK-47 is essentially the weapon of choice for poor nations, terrorists and revolutionaries, and has been for many decades. It is a simple, mass produced assault rifle that is rugged, reliable and predictable. This weapon is proof that, despite the overall failure of communism, high quality weapons designed and made by central economic planning could be produced.

Given that the design of the AK-47 was owned by the Soviet Union, it is also one of the first instances of open source design. China and a multitude of other nations have built their own versions of the AK-47 without having to pay licence fees or be sued for copyright.

The great rival for the AK-47 is the US designed M16 assault rifle. While the AK-47 used wood and mass-produced steel, the M16 used aluminium and high-tensile plastic wherever possible. It was during the Vietnam War that M16 armed US troops encountered Vietnamese communists armed with Ak-47s.

So, which is the superior weapon? In my books, neither.

Both weapons drew upon experience gained during World War II, namely that standard infantry rifles were often unwieldy in close combat and fired rounds that were too powerful. On the Eastern front, German soldiers were eventually armed with the Sturmgewehr 44, the world's first assault rifle and one which looks very much like the AK-47. The Soviets armed their soldiers with the PPSh-41 submachine gun. Both of these weapons used smaller bullets fired in greater number, and were lighter and more able to negotiate close combat. The PPSh-41 had the added advantage of being very cheap and easy to produce, which allowed their soldiers the luxury of having their own weapons (early on the war, the Soviets had more soldiers than weapons, which led to the very Soviet practice of instructing advancing soldiers to pick up the weapons of their fallen comrades)

Eventually, the standard bullet that the Soviets developed was the 7.62x39mm round to fit into the AK-47. Moreover, the tapered case of the round allowed the bullets to be stacked up in the distinctive curved ammunition clip. With 30 rounds of ammunition, the typical Soviet soldier of the 1950s and 1960s had more bullets to fire at the enemy than American soldiers.

The Brits also developed a smaller bullet, but the American military hierarchy had no time for innovation and decreed forthwith that the 7.62x51mm NATO round be the standard for all Western nations to use. The Yanks then produced the M14 rifle, while the Belgians designed the FN FAL (which was also used by the Brits and the Aussies for many years as the SLR). While these weapons were effective, it was increasingly obvious that when M14s or FALs were set on automatic, the recoil of the weapon made the bullets inaccurate. The first bullet may be on target, but each subsequent bullet would fly a metre or more above the first. Essentially, these high powered bullets were being wasted (which forced the British and Australian military to design their SLRs in such a way as to prevent automatic fire).

Sometime late in the 1950s, someone realised the shortcomings of the 7.62x51mm NATO round, and the 5.56x45mm NATO round was invented. The M16 was the first major assault rifle to use this smaller round.

In theory, the 5.56x45mm round was superior to the 7.62x51mm round because it was more effective at short range and allowed soldiers the ability to fire automatically without too much inaccuracy. Two or three 5.56mm rounds hitting an enemy would do at least as much damage, if not more, than a single 7.62mm NATO round. Moreover, the 5.56mm round had a higher muzzle velocity and tended to "tumble" when fired, which meant that these bullets would hit their target slightly skewed, thus increasing the amount of damage caused (a tumbling bullet has a similar effect as a hollow point).

The M16's early history was anything but glorious. Red tape in military procurement resulted in the wrong sort of gunpowder being used, which fouled up the weapons quickly. In practice, this led to weapon jamming amongst American soldiers in Vietnam during firefights. Once, after a firefight, a group of three US soldiers were found dead - their position had been over-run by enemy soldiers and all of their M16s were found to have jammed. The use of plastic in the design and the rifle's light weight also led the M16 to be called "the plastic fantastic" and many felt that the weapon was just an oversized toy.

The Vietnamese soon learned to avoid using captured US M16s. Apart from the gunpowder problem, the weapon was just not suited for guerrilla warfare. While the AK-47 could be dragged through mud and dust by a poorly trained Viet Cong soldier and still be effective, the M16 required a highly trained professional soldier who had time to clean his weapon.

But, in terms of actual firing, the M16 was a better weapon, especially once 30 round magazines became standard. The 5.56x45mm NATO round may not be as powerful as the 7.62x39mm that the AK-47 used, but the M16 was more accurate. Moreover the US troops who fired them were hardened soldiers who were better trained than the brave Viet Cong and North Vietnamese soldier.

Yet while the M16 was a better weapon in terms of firing, the AK-47 was more reliable and more suited to those who used them. American soldiers had the luxury of cleaning their weapons properly while the Viet Cong and NVA did not. An AK-47 could be immersed in mud for months on end and still fire while the M16 would be useless.

With the development of body armour, however, it is increasingly obvious that professional soldiers are threatened less by both the 5.56x45mm round and the 7.62x39mm round. While body armour cannot prevent these bullets from entering the human body at close range, they have acted to reduce a lot of the damage sustained by soldiers from medium range targeting and deflections or ricochets. The relatively low casualty rates amongst US troops in Iraq is a testament to this development of technology. With body armour likely to remain the norm amongst professional soldiers at least, it is likely that the 7.62x51mm NATO round will have a new lease of life (if you pardon the ironic pun). Body armour is very useful against pistol rounds and has saved countless US lives in Iraq against 7.62x39mm rounds, but cannot withstand the higher power of the 7.62x51mm round.

Update:
Ron Lankshear discusses the weapons he has fired.
Posted by One Salient Oversight at 11:50

Sounds like a good conclusion. In repsonse I have a blog on weapons I have fired etc
http://ronlankshearreviews.blogspot.com/2007/10/guns-and-rifles.html

I've soiled M-16s pretty heavily and they will fire.. also, the original 1'14" twist of the M-16 made the bullet tumble explosively whereas the 1'12" they changed up to somewhat reduced it. This had little practical effect. The newer M855 bullet tends to bust at the cannelure and tumble inside 250 meters when fired from a standard length barrel in the M-16A2. The shorty carbines have much poorer terminal ballistics and are responsible for most of the recent stopping power horror stories. I would take issue with one of your points, the NVA had some very professional and well drilled infantry, whereas the Viet Cong irregulars were often not. Among the AKs I own and have fired, I have found them as accurate as I can be inside 100-150 yards with iron sights, but perhaps my standards of weapon care and ammo selection have helped this...

very nice post thanks for sharing it.
Firearms Accessories in Australia

this is potentially the dumbest blog post i've seen about firearms. it's so incredibly misinformed and filled with fudd myths that it's difficult to read without laughing. You should really research all of the stupid garbage you wrote and correct it. You fucking dimwit