Peak Oil and the future of Aviation 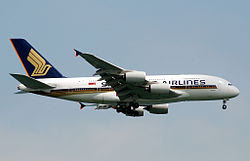 Okay, I admit it. I'm a fan of Airbus. I'm happy for kudos and cash to go to Europe rather than to the US / Boeing. Moreover I think that the A380 is a great plane that will become more popular in the skies as years go by. Boeing's Dreamliner, which represents a different strategy and understanding of what the future will bring, will still sell but will not catch either the imagination, or the comparative orders, that the A380 will.

But what of Peak Oil? Many Peakniks see air travel as one of the industries that will die a painful death as life after the peak gets harder. In many ways this is true - I do foresee great turmoil in the aviation industry. What I don't see, however, is the entire industry collapsing (unless the world goes Olduvai). Like the car industry and international trade, the aviation industry (along with international tourism) will be permanently damaged by Peak Oil... but it will survive in some form.

Which is why I find this report rather interesting:

European aircraft maker Airbus expects the world's fleet of large passenger jets to double in the next 20 years, with congestion in the skies set to spur development of larger and greener aircraft.

World passenger traffic was forecast to increase by 4.9 per cent per year in the 2007-2026 period, almost trebling in two decades, while air freight traffic would rise by 5.8 per cent annually.

Both these figures were higher than previous predictions given by the company.

The greatest demand for new planes will come from the Asia Pacific region, where airlines will take delivery of 31 per cent of new planes in the next 20 years, compared with 24 per cent for Europe and 27 per cent for North America. (AFP)

So, Airbus looks into its crystal ball and sees that the amount of large passenger jets will double in the next 20 years. Fat chance of that. Airbus (along with Boeing) have got it completely wrong. As oil becomes more expensive, more and more people around the world will choose not to fly. There will be a net loss of airline passengers in all markets, leading to bankrupt airlines, airline mergers, reduced construction of new planes and extending the service of older aircraft. Since Boeing and Airbus have a duopoly in the aircraft manufacturing side, both are likely to survive - especially since both companies receive various forms of government assistance. Their profit margins, however, will drop as the industry contracts and revenues dry up. Therefore, the company with the best aircraft to survive the rocky conditions ahead will likely be hurt the least.

And that is where the A380 fits in. The A380 is partly made of composite material (ie carbon fibre) which has lowered the aircraft's weight per passenger and makes for a more fuel efficient flight. Put simply, the combination of the A380's weight and carrying capacity makes it use less fuel per passenger than the latest 747. With Peak Oil raising fuel costs, this will give the A380 a huge advantage.

But what of the 787 Dreamliner? Like the A380, the Dreamliner is also made of composite material. Moreover, a higher percentage of the Dreamliner will be composite compared to the A380 (50% compared to 25%). This will, of course, make the 787 more efficient in its use of fuel. All things being equal, therefore, you would expect the 787 to easily beat out the A380 in terms of its sellability and its fuel costs.

Not so. This is one of those cases where apples and oranges are being compared. The two aircraft are very different to one another and made for different purposes. The A380 is a huge, four engined behemoth that can carry up to 853 people in a single-class (sardine-can) configuration. The 787, by contrast, is a two engined mid-sized passenger jet which can fit no more than 330 people in one go. The A380 is designed to take passengers from London to Sydney. The 787 is designed to take people from Denver to Chicago.

It is precisely that difference that will affect how both models will perform as oil prices continue to skyrocket. Despite the fact that the Dreamliner will be the most efficient mid-size passenger jet on the market, the A380 will continue to burn less fuel per passenger because of its sheer size.

The Peak, which I have argued before has already passed, will naturally result in ever increasing fuel prices and make it more prohibitive for people to travel by air. As costs rise, airlines will have to take a long, hard look at their expenses. It will become increasingly obvious, therefore, that the A380 will be the most economical passenger jet out there. Not only will it be used for intercontinental travel, it will also begin to be used for domestic usage (say, between Los Angeles and New York, or Sydney and Perth). Rather than having lots of mid-sized 787s (and equivalents) flying lots of sorties, smaller amounts of A380s are likely to do the job just as well. With the aviation industry contracting as high prices make it more difficult for people to afford flying, less aircraft flying less routes will become more common.

Of course, airlines will likely wish to extend the lives of their old 747s before buying anything new, but at some point it just becomes more expensive to maintain and upgrade these planes than it is to buy and operate a new one. With no 747 replacement offered by Boeing, the only choice will be the A380.

This is not to say, of course, that the 787 will be a failure. As the industry contracts and less domestic flights are made, there will still be a demand for new mid-sized aircraft - just not the demand that either Boeing or Airbus expect. The only problem I can see facing the 787 is the yet-to-be-flown Airbus A350, which is also made up of the same proportion of composite material and is likely to compete directly with the 787's market. One thing in the A350's favour is that it will carry more passengers than the 787 (the A350-1000 can carry over 400 people), thus making it again, more fuel efficient per passenger than the 787.

Both Boeing and Airbus have the same incorrect view of the future of international aviation - they think it will expand when, in fact, it will contract. Nevertheless, Boeing's strategy (based upon this flawed understanding) is to focus upon the development of the Dreamliner - their thinking being that the market will reward smaller aircraft over larger ones. Airbus' strategy (based on the same flawed understanding that Boeing has) is that the market will continue to reward a mixture of larger aircraft and mid-sized ones (which is why they are currently building the A380 and designing the A350).

Yet while Boeing and Airbus share this same flawed understanding of the future, it will be Airbus that has the best strategy to cope with the reality of Peak Oil. Just don't expect either company to be as big or as rich or as influential in 20 years as they are now.

Update:
Beamer (in comments) has pointed out that the 787 is actually reasonably long ranged. Both planes have around the same range (15,000km for the 787, 17,000km for the A380). This fact, however, does not detract from my basic thesis that the A380, by carrying more people, will be a more efficient airliner. Beamer is right to make this comment since he DOES live near Seattle (the home of Boeing).

Posted by One Salient Oversight at 16:22

What Boeing and Airbus are testing are too very different versions of air travel: the so-called hub and spoke vs. point to point.

Might I suggest this blog, written by a Boeing executive. I heartily recommend the archives of the now-retired Randy Baseler also available there.

Do you work for Boeing Beamer?

Your glee at the prospect of A380 money going to Europe rather than the 787 money going to Boeing is also misplaced. You seem to be unaware of the significant levels of cooperation and risk sharing between Boeing and European and Asian manufacturers including the UK, Italy, Austria, Japan and other countries - not to mention Boeing's subsidiaries in Canada and Australia. That's right: Hawker de Havilland in Bankstown and Fishermen's Bend are part of Boeing Australia, a wholly owned subsidiary of the Boeing Co. There is a not insignificant amount of 787 work being produced by Hawker. Are you still hoping for the 787 to fail?

By the way, I agree that the A380 is a remarkable engineering feat, but I don't believe there is any way Airbus will ever break even on it given the significant cost over runs they have suffered.

Meanwhile, Boeing's shreholders will almost certainly enjoy the fruits of the 787.

Which is more efficient, really?

All new passenger aircraft have design problems that need to be ironed out - the A380 had them and the 787 has them currently.

The 787 will not be a failure. It will eventually become widespread - as will the A350.

Had Boeing gone with a 747 replacement and had Airbus given up making one, this article would side with Boeing. All I'm doing is trying to predict the future, which is that, in the world of expensive oil and a contracting airline industry, the A380 will do better in comparison to anything that Boeing offers.

Neil, if you browse the Boeing web site I linked above, you'll see that Boeing has in fact already announced a replacement for the 747: the 747-8.

Lots of smart people at Boeing and Airbus are betting their careers on their respective visions. I believe that in a world of scarcity and competition for passengers, the airplane with the lowest marginal cost per revenue km will prevail. I can certainly conceive of a niche for each of them, but I believe the 787, with two engines, lighter weight and design to fit within existing airport facilities will be the more successful model in the long run.