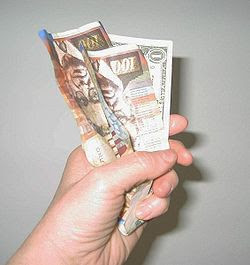 This is good stuff. Any of you who read my blog regularly know that I am all for inflation targeting, but my target is zero percent inflation, what is also known as Absolute Price Stability. What Mish criticises is the idea that inflation can be targeted at 2% and still be described as "price stability":

The reason banks (and government) want inflation targets is that inflation is beneficial to those with first access to money: banks, government, and the wealthy. By the time access to credit filters down to everyone, the economy is poised to reverse. This happens time and time again in every cycle. The current housing bust is the latest example.
...
What it all boils down to however, is inflation targeting is nothing more than Fed sponsored theft to the detriment of those who obtain access to credit late in the cycle.
...
In the final analysis the Fed undershoots, overshoots, and blows serial bubbles. It matters not whether this is by accident or design. The end result is the same: wealth concentration in the hands of the banks and the wealthy, fear sponsored government fascism, and the impoverishment of the middle class. For these reasons the Fed should be abolished.

Note that the inflation cycle ends when consumers are no longer willing or able to borrow, and banks are no longer willing or able to lend. The preponderance of data suggests that is precisely where we are now. The last time this happened the US was facing the great depression. There are now safety nets that may prevent a similar occurrence now, then again perhaps not. The real question is whether or not one is prepared.

Personally I think that the whole "abolish the Fed" argument is overdone and this quote ends in an unecessarily apocalyptic tone - nevertheless I think his basic argument is correct in that long-term inflation still creates the investment bubbles and painful corrections that short term inflation has created in the past.

To be honest, the idea that "zeroflation" is now seen by some as a desired economic goal is quite a change from even six months ago. I have argued for this sort of monetary policy for years and it seems as though the current economic downturn - along with Ben Bernanke's panicky rate cutting - has got people rethinking their assumptions and trying to think up new ones. Nevertheless, given the distrust that economically minded Americans now have of the Fed (distrust that was always there but has now been justified by "Helicopter Ben"), I would think that a return to a Gold Standard would be a more likely outcome than a Federal Reserve Bank committed to Absolute Price Stability and under the chairmanship of a Super-Volcker.

And this is a pity, since I believe that returning to a Gold Standard would be a regressive step, while "zeroflation" practised with a floating currency would be far more ideal.
Posted by One Salient Oversight at 09:04

I'm not sure I agree with Mish's statement about inflation benefitting those with "first access" to money. How do the wealthy get first access to money? I don't understand the term.

Inflation tends to favor debtors as opposed to lenders regardless of when they borrowed since they are paying back with cheaper dollars. There is no bigger debtor than the US government, so inflation benefits it.

Mish is obviously not a monetarist.