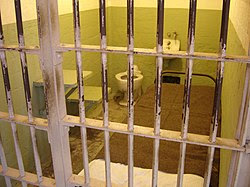 From the department of We're-no.1:

For the first time in the nation’s history, more than one in 100 American adults are behind bars, according to a new report.

The number of American adults is about 230 million, meaning that one in every 99.1 adults is behind bars.

The incarceration rate is higher than virtually every single country in the world. Is this because America is more able to punish criminals? Or is it because there is more criminal behaviour in America?
Posted by One Salient Oversight at 13:47

I'm pretty sure it's because of our stupid drug laws. I'd bet money that many of those incarcerated were convicted of marijuana possession.

absolutely it's due to stupid draconian drug laws, "three strikes" nonsense, and Victorian pinch-butt notions of sex and its commerce.

I'm not soft on actual, you know, crime. but victimless "crimes" e.g. possession, prostitution, etc. are hardly worth putting people in prison.

There is even a TV show "America's Hardest Prisons". Over the years my study of USA prisons tells me I would not want to be in one so why are they so popular. I have been very close to Alcatraz - ok just looking at it from Fisherman's Wharf - looked so awful why would I take the boat trip.

Anyone any breakdown stats on crime?

42: I agree with you except I don't agree three strikes is necessarily nonsense. If someone is convicted of three violent felonies, for example, I don't have any objection to applying a three strikes rule.