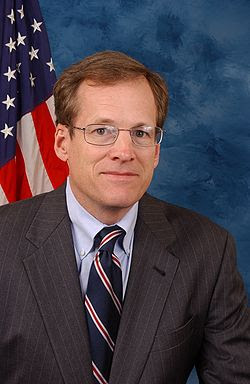 Republican Jack Kingston is angry I tells ya:

During Friday night’s Real Time, Republican Congressman Jack Kingston took to the airwaves to echo the right wing talking points of Obama being “not patriotic enough”. One of the memes that Kingston brought up was about Obama not wearing his lapel pin.

Yep. You read that right. Obama is the worst thing to happen to America since 9/11 because he dares to not wear a lapel pin.

Here's a picture of Jack Kingston complaining about the lack of lapel pin.

h/t Crooks and Liars for this one.
Posted by One Salient Oversight at 08:50

I cannot say I have ever noticed anyone wearing a flag pin!
You see the flag flying outside an enormous number of houses in the States. Very few here in Sydney.

He is also Obama wants to bomg Pakistan - is that true? I presume the borders with Afghan. Clinton used to send cruise missiles to get Usama never succeeded

Obama said the US should "invade" - not "bomb" - Pakistan. One of his biggest faux pas, but so far he's not being called to account for it.

which was the false step in saying invade when he might have meant bomb or in saying anything at all.

All I hear him saying is CHANGE. Mind you I only watch the summary of things. Too much else to "worry" about then how I might vote if I was a USAer

His web site page on foreign policy links to what he said in 2002
http://www.barackobama.com/2002/10/02/remarks_of_illinois_state_sen.php

But I did not see new policy just comments from fans.
So is he just "trust me"