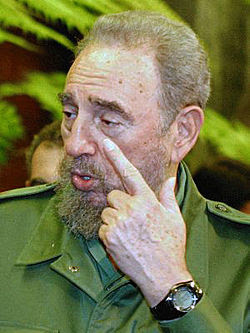 From the department of crisi-tunity:

Ailing Cuban leader Fidel Castro said on Tuesday that he will not return to lead the country as president or commander-in-chief, retiring as head of state 49 years after he seized power in an armed revolution.

Castro, 81, who has not appeared in public for almost 19 months after undergoing stomach surgery, said in a message to the communist nation that he would not seek a new presidential term when the National Assembly meets on February 24.

"To my dear compatriots, who gave me the immense honor in recent days of electing me a member of parliament ... I communicate to you that I will not aspire to or accept -- I repeat not aspire to or accept -- the positions of President of Council of State and Commander in Chief," Castro said in the statement published on the Web site of the Communist Party's Granma newspaper.

It has been years, probably decades, since Communist Cuba posed any real threat to the United States. Ever since the heady days of the 1959 Revolution, the 1961 botched Bay of Pigs invasion and then the Cuban missile crisis in 1962, Castro has led Cuba to, well, hardly a worker's paradise, but hardly a basket case either.

By some measurements - especially those quoted by Michael Moore - Cuba surpasses the United States. Infant mortality rates are lower than the US and doctors are plentiful enough for people to have adequate state provided health care. These stats are true - and Michael Moore is right to use them - but they can hardly be used to show that Cubans are up there with the best.

Nevertheless, the United Nations Human Development Report has Cuba sitting at a HDI of 0.838, which indicates that it is considered a "high human development". The HDI number is determined by giving equal weight to three important factors - GDP per capita (PPP), average lifespan and educational levels achieved. By this index alone, it could be argued that Cuba represents the only communist state in history to have actually achieved what it set out to do - provide an ever-increasing standard of living for its people. Cuba is not a third-world country and is edging closer to becoming a first world country.

And it is this increasing standard of living that has allowed Castro to remain in power for nearly 50 years. Despite all the past rumblings of counter-revolution in his country, the fact is that most Cubans are probably quite happy with the way their country has gone under Castro's leadership.

Of course, Castro is no angel. I'm certain that human rights violations occurred under his rule (especially early in his presidency). I'm also certain that he rewarded friends and family with juicy positions of power and wealth above and beyond the reaches of ordinary Cubans.

So when you take Castro's contribution to the nation in net terms - the benefits minus the evil - he comes out looking pretty good.

Despite my comment above about Cuba being the only successful Communist country in history, it turns out that the economy itself is hardly anything Marx or Lenin or Mao or Kim Jong Il would be happy with. While much of the economy is planned, about one quarter of the economy consists of private businesses. In technical terms, I would not describe Cuba as Communist since a strict definition of Communism means that 100% of the economy is planned and controlled by the state. Cuba is more akin to Democratic Socialism which is more tolerant of private industry and letting the market have some say in what goods and services get produced (though I would probably be too generous in describing Cuba as being Democratic, when it is most obviously not!).

The most obvious barrier that needs to be removed is the US trade embargo. This embargo has been in place since 1962 - a 46 year old trade barrier that serves no useful purpose any more. As I have said earlier, Cuba has not been a threat to America for many decades, despite having the same ruler in that period. Now that Castro is stepping down, the US should "extend the olive branch" and resume trade with this important nation on their doorstep. Both countries will benefit.

Radical economic and political change is NOT what Cuba needs. Yes, change probably does need to occur and some aspects of the economy that are planned by the state should be handed over to private industry to do more efficiently - but this needs to be done patiently and judiciously. In the same way, moving Cuba from a one-party state into a more representative democracy is needed too, but not too fast and certainly not at the expense of economic and social stability.

Cuba also needs to look at its past and examine more objectively the events surrounding the 1959 revolution and Castro's consolidation of power in the years after that. Human rights violations need to be exposed and the revolution needs to be demythologised - but not as some sort of national shame, but as part of facing up to the future, much in the same way as South Africa has done with its Truth and Reconciliation Commission, which has exposed much of the sins of South Africa's past without destroying the people of the present.

Of course Cuba should change - but, on the other hand, there is much in Cuba that works. For years the country has refused to co-operate with the United Nations in determining the country's Human Development Index. Now that they have accepted, the UN report shows that Cuba's standard of living is quite high compared to the rest of the world, and surpasses many of its neighbours. Any change that reduces this standard of living should be put aside.

Castro is one of the main reasons why Cuba is in such a good state today. Now that he has retired, a new president will be "elected" and it is hoped that this man will continue the good work that Castro has achieved but also offer something that Castro could not - a more democratic and free Cuba.

Posted by One Salient Oversight at 23:31

I have long advocated the elimination of the Cuban trade embargo, but your ignorance of Castro's malign hand on Cuba is appalling.

Moore was not truthful regarding Cuban health care. Furthermore, I think you know it.