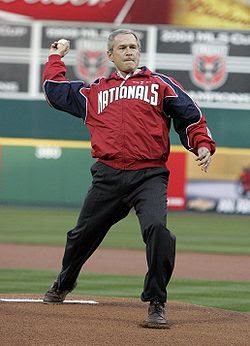 From the department of cliff diving:

Among all Americans, 19% approve of the way Bush is handling his job as president and 77% disapprove. When it comes to Bush's handling of the economy, 14% approve and 79% disapprove.

The fact that most Americans don't like Bush is now well entrenched. Bush's approval ratings dropped below 50% somewhere between his re-election and Hurricane Katrina, and has continued to drop.

What is notable is that this drop in support appears to be very precipitous. The January 2008 poll indicated a 34% approval rate, while the February poll drops down to 19%. That's not a drop in support, it's cliff diving!

The poll itself was not conducted by any of the major polling companies, so we need to take that into consideration. As soon as I saw this poll I checked out the pollingreport.com page on Bush's support which summarises monthly polling from major polling companies. So far, there has yet to be any major drop in support like the one experienced by this particular poll. Nevertheless, this poll has been conducted recently (less than a week ago), while the latest ones at pollingreport.com are dated in early February.

But what this poll - conducted by the American Research Group - indicates is that their previous polling was in line with the majors. Up to January 2008, ARG polling matched with polling conducted by CBS, Pew, NPR, Fox and others. Basically ARG polling indicated that Bush's support level was hovering around 34%.

I would suggest, therefore, that this calamitous decline in support has actually occurred and is likely to be revealed in the next week or two by the major polling companies.

But what is causing this drop in support?

Bush's decline in support has been going on for a while. Essentially, two-thirds of Americans have disapproved of the Bush presidency for about three years. Yet in this time there has always been a "stubborn" (or "loyal", depending upon your bias) minority who have stuck through with Bush. If this polling is correct (and it may not be), just under half of these stubborn supporters have suddenly fallen out of love with the president. Moreover, it appears as though 3 out of every 4 Americans now disapprove of the president.

Polls come and go, and there is certainly evidence that the people can sometimes change their minds in hindsight long after the president has gone - which is certainly what happened to Truman. Oftentimes, though, drops or increases in presidential support come as a result of some major decision or speech or whatnot. Jimmy Carter's "malaise speech", for example, marked a significant decline in his popularity as recorded by the polls at the time.

But what has Bush done between January 2008 and February 2008 that caused this? I check the internet and the news every day, and I don't remember President Bush saying "I hate America" or "The people who voted for me are idiots". I don't remember him signing a treaty allowing Mexicans to legally kidnap Americans and take them across the border to be forced to work in their underground Burrito mines. I don't remember him being photographed in bondage gear while Dick Cheney whipped him with one of the original declarations of independence.

Something has happened to the American people - specifically loyal Bush supporters - between January 2008 and February 2008 that has caused support for the president to plummet.

Assuming that this poll is right - and polls can be wrong - I'm thinking that there has been a rather large decrease in small business revenue as well as a rather large increase in unemployment. Let's see if I'm right.
Posted by One Salient Oversight at 10:52

Could it be Obama and Clintons are getting to the people enough to make folks think they will vote Democrat
and hence they see Bush in a new low light. Plus he ain't in the country he is all over the place

Personally, I think that people have stopped paying attention to him and have started thinking about who the next president will be and what he or she is likely to do.

I can't think of any time in polling history that a president's approval rating has fallen by 15 basis points in one month (34% to 19%) without the president doing anything really, really stupid.

I've crossposted this over at Dailykos (I'm a part time Kossack) and some people are saying that it's the natural reaction to Obamarama. To be honest I can't imagine why nearly half of George Bush's most ardent supporters would suddenly fallen for Obama.

For a sudden drop in popularity amongst the uber-faithful in just one month speaks of something very serious occurring within the population that has yet to make news. That's why I think it is unemployment.

There's also the chance that the poll is wrong. But even polls that are wrong are rarely, if ever, THAT wrong unless someone stuffed up the software algorithms.

But even polls that are wrong are rarely, if ever, THAT wrong unless...

...the pollster is Zogby.

I still think that people have, psychologically, forgotten about the lame duck President and can't be bothered thinking about him. They've moved on. The press has all but forgotten him, too, what with Hillary! and Obamania and the Straight Talk Express.

We'll see. As far as unemployment goes, in my part of the country, it's a non-issue. My firm is finding it almost impossible to get enough experienced workers that are willing to work for our union-negotiated wage rates. There's little to no surplus labor out there (that can pass our mandatory drug test).