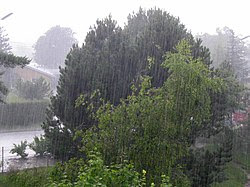 As summer comes to an end today, Sydneysiders may wonder whether it was ever here at all.

Searing heat, parched gardens and sunny skies - trademarks of an Australian summer - were replaced by cloudy days and lots of rain, according to the Bureau of Meteorology.

"In terms of rainfall it's been the wettest summer for six years," said Shannon Symons from the bureau's climate centre.

Sydney received 438 millimetres of summer rain, a figure achieved by consistent rainfall throughout summer, rather than a handful of large falls, Ms Symons said.

No single-day rainfall records were broken, she said.

Remarkably, not one day this summer pushed past 31 degrees.

"That's only happened three times in the past (in 149 years of the bureau's weather records), with the last being 1956 - it's quite significant," Ms Symons said.

Average maximum temperatures were 25.2 degrees, making it the coolest summer in Sydney since 1996-97.

Sydneysiders can blame La Nina, the weather phenomenon in effect in the Pacific Ocean since November, for the rain and cold weather, Ms Symons said.

Typical of the entire summer, its last week saw heavy rainfall and violent storms lash parts of the state.

There are two basic theories as to why this has occurred.

One, by the ignoranuses, would be "OH NO THE WORLDS GETING COOLER NOT WARMR THAT MAENS GLOBAL WARRMING IS A CROCK LOL".

The other, mentioned in the SMH article, is that the La Nina weather phenomenon has affected it. More than that, although this sort of weather pattern doesn't occur all the time, it does happen now and then.

For me, the world's greatest warmophobe, this summer will live long in my memory as one of the most tolerable on record.

Of course, Autumn is tomorrow, and March/April weather can still be quite warm. But at least the nights are getting cool. Last night it got down to 15°C (59°F), which was most pleasant. I'm still wearing my tracksuit pants!
Posted by One Salient Oversight at 16:14