Again with the shooting 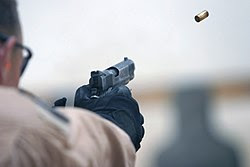 From the department of horrible yet predictable:

Eighteen people were injured and several people were taken away in ambulances after a shooting at Northern Illinois University, west of Chicago, this morning (Australian time), officials and US media said.

The Northern Illinois University website is urging people not to come to campus.

"It has been confirmed that there has been a shooting on campus and several people have been taken away by ambulance," it read.

CNN reported that as many as 18 people had been shot.

The website of the university reported that the gunman had been killed, the BBC reports.

A local hospital said it was expecting 15 victims but there was no word on their condition.

One student told local radio that roughly 140 students were in a geology classroom when the man opened fire.

Another mass shooting in the United States.

Although mass shootings do happen in other nations, there is no doubt that they happen more often in the United States. What is it about the country that lends itself to this sort of violence? Certainly I believe that the second amendment - a constitutional right that is not present in most other industrialised countries - is partly to blame.

It can't be video games - other nations have video games and they don't have the same amount of gun violence (not to mention the fact that mass shootings in the US pre-date the video game industry). It can't be television - for the same reason.

What is unique about the US that creates such an environment for these shootings to occur?
Posted by One Salient Oversight at 10:09

I'm reading two handguns and a shotgun. One trouble is handguns are too easy to obtain in USA. One witness described gun as huge so could it be a military weapon. But the state of wounds implies a "normal" shotgun and it seems he just went around reloading as he went.

So what is problem with USA - as I said weapons are too easy to obtain and there must now be an element of copycat.

BUT lets step back and look at statistics
http://www.reuters.com/article/domesticNews/idUSN1449879120080215

I see 16 shootings at schools etc of which 8 are in USA. One of the others is the Chechen terrorists in Russia - taking that out we are around 50% of all school etc shootings are in USA - which to me sounds like people anywhere in the world will take out their grudges this way BUT it is too easy to get the weapons in USA

The Second Amendment was ratified in 1791 but these horrible mass shootings are a very recent phenomena.

Blaming the existence of the 2nd Amendment for these shootings is simplistic and most likely wrong.

Cultural, political, religious and other changes have occured in US society over the last 100 years which I believe would have much stronger correlation to these shootings than the 2nd Amendment.