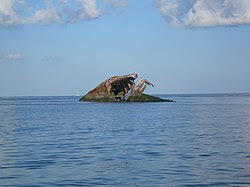 From the battalion of bad-news:

U.S. stocks tumbled the most in 11 months after service industries contracted at the fastest pace since 2001, reinforcing concern the economy is in a recession.

Exxon Mobil Corp. and General Electric Co. led declines in New York trading and all 10 industry groups in the S&P 500 retreated after the Institute for Supply Management's index, which reflects almost 90 percent of the economy, fell more than forecast. Citigroup Inc. led 91 of 92 financial shares in the S&P 500 lower after Fitch Ratings said it may downgrade the AAA insurance rating on MBIA Inc., the largest bond guarantor.

``As the recession unfolds, then profits will disappoint,'' Stuart Schweitzer, who helps oversee $420 billion as the global markets strategist at JPMorgan Private Bank, said in a Bloomberg Television interview from New York. ``It's already under way.''

The ISM's non-manufacturing index, which assesses banks, retailers and construction companies, slumped to 41.9 from 54.4 the prior month. A reading of 50 is the dividing line between growth and contraction.

There's even worse news. Everyone is rightly looking at the information about the services sector contracting. It's probably the best evidence so far that the US economy is shuddering to a painful halt - but there is something else that they have forgotten to look at - inflation.

Look at the table here. This table is the release that has got everyone spooked. The obvious spooky bit is the second row down entitled "Business Activity/Production" where the number has gone from 54.4 in December to 41.9 in January. As the quote above indicates "A reading of 50 is the dividing line between growth and contraction". The drop in the services sector is horrendous.

But look further down the table to the section marked "prices". What are the numbers you see there? 70.7 in February and 71.5 in January. These figures indicate rampant inflationary pressures. Even though the January figure is slightly lower, it is simply saying that prices have increased but at a slightly lower rate.

The contraction in the services sector - indeed a contraction of the entire economy - will have a deflationary effect on prices. But, as I have argued before, the question is whether deflationary contraction will balance out the inflationary pressures of a lower currency. I don't think it will, and I stand by my prediction that 2008 will be a year in which America battles both a recession and inflation, which will require them, eventually, to raise interest rates and cause a double-dip recession.
Posted by One Salient Oversight at 09:55