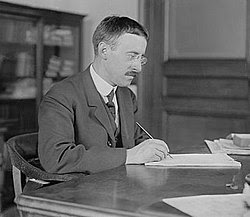 As a small percentage of you know, I have used this blog to write some short stories. The last one I wrote was titled "F-14 Short Story" (mainly because I couldn't bother finding a good title). The one before that was titled "November 22, 1963" and explains, in prose, my theory of what really happened when JFK was assassinated.

I also have two other blogs which I never update. "Entropy" is a TV-like script I wrote about 10 years ago. Think of "X-Files" and "Brazil" and "Pulp Fiction" all mixed together. Caldera is an idea I had a few years ago for an alternative Police Drama, but didn't go beyond the ideas.

Lately I've been toying around with another idea. What I'm going to try to do is write a Police Drama story based in a fictional county in West Virginia. I've got the basic stuff thought up and Chapter One is nearly finished.

My aim is to write a chapter a week - about 2000 words - of one scene. This won't be a serious project (I'll licence it under a Creative Commons Attribution 2.5 Australia License which allows anyone to modify it, copy it and use it for commercial purposes without having to pay me) and it'll be done as a bit of fun. I'm not trying to become an author or anything silly like that - I just feel like I want to write and I have a good idea.

At this stage I'll be publishing every Friday. I will be including swear words in the dialogue and there will be descriptions of violence.
Posted by One Salient Oversight at 11:57

And if you ever feel inclined to write a Christian-themed but mature short story, there's always Relief Journal and its genre-fic sidekick, Coach's Midnight Diner.

The Kenedy era fascinates me. One of these days I'm going to write a SpecFic piece where God comes to a geekish Nasa engineer (as he came to Lot through Abraham) and tells him that He will nuke the world for its unrighteousness.