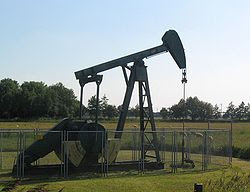 Despite all the talk of recession, oil prices remain very high. After hitting $100 per barrel a few months ago, the price has receded somewhat to around $87, but has, in the last few weeks, climbed back up to $95.

Remember when oil passed the $40 per barrel mark? That was about 3 years ago. And remember what they all said at the time? "It's okay, the market can't sustain prices that high. At some point it will drop back down below this level".

Of course, oil, like any commodity, rises and falls in price according to the mysterious forces of supply and demand. All things being equal, of course, the idea that oil would drop below $40 some time in the future is a reasonable way of thinking.

Unfortunately, all things are not equal.

The price of oil has sky-rocketed because of two reasons. The first, and the most minor point, is that the US Dollar has dropped in value in the last 12-18 months. Since oil is priced in US Dollars, as the US Dollar devalues, so the price of commodities responds by having higher dollar values to compensate.

But the real reason oil is so expensive is because supply is tight - so tight in fact that oil production in the last two years has hardly increased at all. Usually, in the world of supply and demand, when prices go up it usually means that demand is outstripping supply. In response, the market usually reacts by increasing supply. But when you look at the figures, you'll see that, while oil prices have gone on an upward curve for the past 3 years, oil supplies have remained constant.

So what has happened to supply? It is not in the interests of oil companies to keep prices so high. Apart from the danger of demand destruction (when prices get so high that people stop buying it), oil companies can make more money by supplying more and making the price drop than they can by letting the price get to where it is now.

Peak Oil is the belief that worldwide oil production is going to, or has already hit, a "peak". This means that, once the "peak" has passed, worldwide oil production will decline as the years go by. This is not "running out of oil" (there is plenty of oil yet to be sucked out) but it does mean that oil supply will be unable to meet demand. Peak Oil is more than just a belief though - it is a scientific phenomenon backed up by empirical evidence.

So, will oil prices ever get back below $40? I doubt it, very much. We may probably get prices between $100 and $150 this year but I am now leaning toward a price range of $70 - $100 (based upon the US recession and the drop in oil demand this will cause).
Posted by One Salient Oversight at 10:55