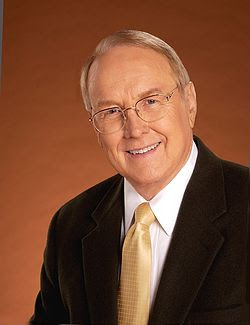 I just read this brilliant critique of James Dobson and his refusal to support John McCain. It's from SBC Outpost:

Dr. James Dobson is probably a good man. He loves his wife. He loves his children. I’m pretty sure he loves Jesus. He also loves the spotlight that comes with political influence. For this, of course, I do not fault him. Something about glass houses comes to mind.

Yesterday James Dobson released a statement opposing John McCain’s candidacy, and thus he lined up with Limbaugh and Ingraham and Coulter. The reasons for Dobson’s opposition were clearly enumerated: McCain would not support a constitutional amendment to “protect” the institution of marriage; he supports embryonic stem cell research; he opposed ending the “marriage penalty tax”; and he “has little regard for the freedom of speech.” In his bill of particulars, Dobson might have revealed more about himself than he did John McCain.

James Dobson is an idealogue. You’re either for him, or you’re against him. More than ten years ago Dobson rattled his sabre at a meeting of the Council for National Policy meeting in Phoenix by threatening to bolt from the Republican Party. The party bosses got weak at the knees, and Dobson’s little tempter tantrum won him greater influence in the GOP. But Dobson’s tribe is diminished, and not a day too soon.

Pat Robertson went with Rudy Giuliani. Paul Pressler went with Fred Thompson. Jack Graham and Danny Akin went with Huckabee. Jerry Falwell, by some estimates, was poised to support McCain before meeting his Maker last May. The Religious Right has come of age and no longer looks to God’s gurus in Colorado Springs or Lynchburg for election day directives.

Unlike other prominent religious conservatives who possess deeply-held religious views, James Dobson has never tried his hand at public office. Huckabee left a Texarkana pulpit for the Arkansas governor’s mansion. Pat Robertson mounted a tremendous effort to gain the Republican nomination in 1988. These men knew that there are two options in life: you can either stay on the sidelines and whine, or you can get into the field and make a run for it. Huckabee has had more success than anyone imagined. Robertson learned his lesson another way.

But Dobson just sits on the sidelines — election year after election year — and threatens to pull his support or stay home. Ten years ago, most evangelical voters would have listened attentively. Many would have followed his lead. Today, we just watch with waning interest as James Dobson grows increasingly shrill and unimportant.

I wonder what might have happened if the child psychologist turned evangelical superstar had made a run for the United States Senate from Colorado a decade or so ago. He very well could have won. If he ran today, he would suffer resounding defeat in a state where twice as many Democratic voters went for Barack Obama as Republicans went for Mitt Romney. I’m sure that Dobson would tell us that “God didn’t call him to run for public office.” It’s funny how God seldom calls evangelicals to suffer political defeat.

Ronald Reagan was responsible for giving the GOP their eleventh commandment: “Thou shalt not speak ill of any fellow Republican.” I’m not asking Dr. Dobson to observe laws from Simi Valley with the same commitment as he would observe those from Sinai. Neither am I asking Dr. Dobson to stop exercising his right of free speech.

All I’m asking is for evangelicals in the Republican Party to give James Dobson the same kind attention we would give to our senile and increasingly erratic grandfathers.

Love them. Listen to them. Laugh with them.

Then make sure they take their medicine.

And "Steve" in the comments has this little gem:

Even though Romney is the architect of gay marraige in Massachusetts and announced last week that he supports “gay rights,” Focus leaders, for some strange reason, think Romney should be the man we all get behind. These Focus officials have been pressuring Dobson to endorse Romney so the Romney attack on McCain — and an earlier attack on Huckabee — is a discreet effort to urge Christians to support Romney.

I never thought I would see the day when one of the leaders of the Christian right promotes the one politician in America who legalized gay marraige.

The Christian right needs to get its act together. Rather than supporting this candidate and or that candidate (which has resulted in Dobson's tacit support for a Gay marriage legalising Mormon) the religious right need to get their own man in there. In theory, Huckabee is the only real choice but Christians all over the U.S. don't see him as "conservative" enough because he is in love with big government (which is conservo-speak for having a centrist fiscal position).

But, then again, all this shows just how silly it becomes when Christians start only wanting to vote for politically conservative born again Christians.
Posted by One Salient Oversight at 09:30

Let me get this straight: they want born again Christians to lead the country, they want conservative family values, they want right-to-life legislation, they want traditional American values... but they won't endorse the candidate because he's too far left?

"The RED TERROR might get them, or even be under their bed!"

It seems that for all their "Christianizing" of politics, an outdated fear of Communism or anything "left" comes before Jesus. Man they are an inconsistent bunch!

All of life is under God's rule, from the spectacular to the mundane, from the "spiritual" to the "secular". So how I pray with my kids is as important as how I spend my time, wash the dishes, and paint our new office.

Except the "Christian right" are saying it's not, your economic preferences are more spiritually important for the nation than whether or not your candidate actually loves Christ. Hmmmmmmmm. Inconsistent.

What of we evangelicals who support neither Mike Huckabee, John McCain or James Dobson?

My view of Dobson is, if he ever had large political influence, those days are long past. Even in those days he did have measurable influence, he ensured that those most opposed to his views were elected. His rigidity and uncompromising positions guaranteed that his followers would throw their support to fringe candidates or abstain, thereby giving close elections to those most opposed to Dobson's views.

In Dobson's world, 99% agreement is no agreement at all.

To me McCain seems ok. Romney keeps claiming BIG expertise to fix the economy. Huckabee is very anti Romney.
And anyway won't one of the Democrats win. And make history as a first whichever one it is.
Perhaps McCain is the only one who can fix the military situation.
Now Beamer who do evangelicals support?

I'm not sure that it is possible to answer your question, Ron. Certainly I can't. There is no "evangelical candidate."

Those on the left seem to slightly favor Obama, based on the rhetoric I've heard. Except in Iowa, where they favored Huckabee, I don't think any of the Republicans can claim to be the evangelicals' first choice.

McCain is one of those guys who's kind of a paradox. He is a bit of a loose cannon with a vain streak: No understanding of - or patience for - free markets; has expressed open disdain for evangelicals; he has a sometimes brittle ego, and rarely forgets or forgives perceived slights; he tends to resort to ad hominem attacks when confronted with contrary views (although I will give him credit he seems to have that bottled up well during the campaign). He claims to be pro-life, but former Sen. Santorum, an ardent Catholic, says that McCain significantly tempers his pro-life rhetoric in the committee room. Santorum says he's one of those, "With friends like these..." pro-life guys.

He has skeletons in his closet that will undoubtedly come out if he gets the nomination, particularly The Keating Five.

But his military credentials are impeccable and obviously he's a man of great personal courage. He is viewed by many on the right as a guy who would throw conservatives under the bus in a heartbeat if it would get him some good press.

I wouldn't be surprised if he self-destructs by shooting off his mouth during the heat of the campaign later this year.