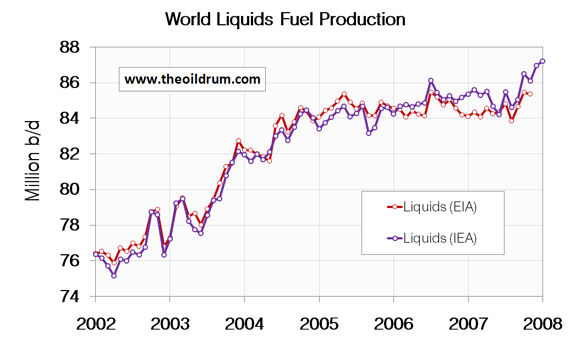 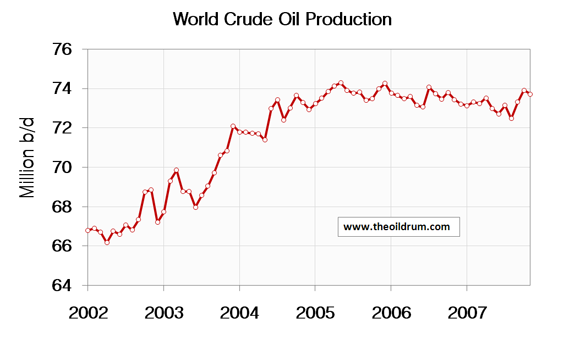 This is the latest report from The Oil Drum, a website dedicated to the science of Peak Oil and the statistics of the oil industry. While the first graph shows that the total amount of liquid hydrocarbons has increased, the amount of crude oil produced continues to decline from the May 2005 peak. In short, this means that things like Liquefied Petroleum Gas (LPG) has managed to increase production significantly while crude oil is getting harder to extract.

Remember, these graphs (especially the second one) are clear evidence of Peak Oil. If oil could be extracted faster, it would, and oil producers like OPEC would be taking full advantage of oil at $100 per barrel. But it's not happening. The price has increased as demand has continued to climb, while supply has remained static. Either the world's oil producers are deliberately not producing enough oil (for what reason I don't know, it would certainly not be profitable for them) or there is something preventing the oil from being extracted at the desired speed. The latter explanation fits the theory of Peak Oil. If this subject is new to you, please read the Wikipedia page on the subject... and be frightened.
Posted by One Salient Oversight at 13:42

I agree with your thoughts and research done here Neil.

Though I also think that behind the scenes there is technology being developed / has been developed that doesn't need so much petroleum products. While there is still a lot of profit to be made from oil, we wont see it quickly released.

When I was in hospital I watched a documentary on a French fellow who made a van that ran on compressed air and could go 200 km on the tank. He then made a another one with a small motor in which could run on air and petrol... which was very fuel efficient.

In this second van he designed it that every time the brakes were applied it compressed a small amount of air into the tank and when the motor was running it also ran a small compressor...