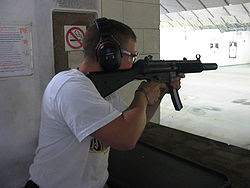 Whilst reading a comments thread over at Calculated Risk - an economics blogsite that is probably the best place on the internet to go to understand the whole subprime mess - I came across some rather disturbing revelations (click on the comments button on this post):

I wish I was kidding... Four years ago everyone was buying aircraft and boats. Now...

The mood around the office has gotten quite surly lately.

If I lived anywhere but CA I'd already have a couple ARs, too. Glen over at Winter Watch has been teasing me with the Rock River Arms AR-15 chambered for .458 SOCOM.

yes BB is in over his head...we all are and anybody in his position would be as well. this is like so many games of chess played where after so many moves there is no way out.

now it's time for the pain.

Scott:
gold still has lots of upside potential but who knows for sure...not me. my play in the last year has been palladium as an alternative to platinum AND because it is the only material on earth that filters hydrogen gas from all others (is also a sponge) H2 economy?!

give yourself a choice other than deadly physical force if you need to defend.

most cops and others, who have had to take extreme measures are haunted and suffer... (unless you are a sociopath)...but sometimes you have little choice.

12 gauge pump with the double 0 removed from the first round and replaced with, salt or a bean bag is formidable and of course loud.

also, a mega can of bear spray is awesome (looks like a small fire extinguisher and is filled with 10% oleo-capsicum)..sprays 15 feet...,non lethal and feels like fire has been poured on you.

The current recession and all the bad news that is coming out of America has obviously got people spooked - but the people spooked on this thread are not anti-government redneck militia members, they are people with an interest in economics.

Let me say for the record that I do not believe that US society will collapse into anarchy as a result of this recession. Even the 1930s depression wasn't as bad as the possible collapse that these commentators fear. Even they would probably realise that there was some fearful irrationality behind their comments.

What is DOES show, however, is that people are frightened. When Bush appears on TV and says "there won't be a recession" they don't believe him. When Bernanke appears on TV and says "the Fed will fix things up", they don't believe him. With faith in these institutions now at a nadir, people are naturally resorting to "preparing for the worse". This is NOT similar to the Y2K panic.

But, then again, you can hardly be unconcerned about recent panic when the US Dollar is doing this:

Posted by One Salient Oversight at 09:39

When the petrol rationing starts and those queues get more and more desperate, just how tempted are people going to be to pull out their pistols and sort things out themselves?