Wheat prices rise to US$9 per bushel 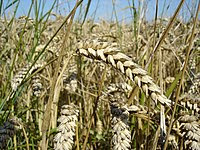 Sept. 12 (Bloomberg) -- Wheat prices surpassed $9 a bushel for the first time as a drought in Australia cut production, pushing global stockpiles toward a 26-year low.

Australia's wheat crop may be forecast at 18 million metric tons from a previous prediction of 23 million tons in a U.S. report today. In Canada, the world's second-largest wheat exporter, reserves of the grain plunged 29 percent at the end of July from a year earlier, Statistics Canada said yesterday.

Rising prices of food, from wheat to milk and pork, are stoking inflation at a time when traders expect the U.S. Federal Reserve to cut interest rates to bail out the housing market and avoid a recession. Wheat prices more than doubled in the past year, increasing costs at Sara Lee Corp. and Premier Foods Plc.

``The market is in a real frenzy,'' said Tobin Gorey, commodity strategist with Commonwealth Bank of Australia Ltd. in Sydney. ``It's feeding through to the consumer.''

Higher bread prices will result when you go shopping. Global Warming is partly responsible for the current drought in Australia, thus cutting supply, while Peak Oil makes farming more expensive (oil is used to manufacture pesticides and herbicides and is used in the machinery that plants and harvests wheat).

How about a desal plant on the coast pumping irrigation-quality water inland to keep Australian wheat farms properly hydrated?
Posted by One Salient Oversight at 15:42