A humane way to help Iraq

Put aside, if it is possible, the morality and legality of the 2003 invasion of Iraq, as well as the confusion as to what to do next (ie should America stay or leave?). Rather, let's focus on a rather important fact:

There are at least 4.2 million Iraqis refugees.

Each one of those 4.2 million has his or her own story to tell. They are fleeing the violence and the death. They have endured hell and they want out.

Of those 4.2 million, 2.2 million have actually left the country. The rest are "internally displaced", which means they have fled one place and are in another. Most of those would probably want to leave to.

The scale of this human tragedy is terrible. A refugee has no income, no means of supporting themselves or their family, and has limited access to food, shelter and health care. Refugees often live in appalling conditions and mortality rates amongst both children and adults are terrible.

It is time that these refugees had a place to move to. Those places are Australia, Britain and the United States - the three nations involved in the 2003 invasion. 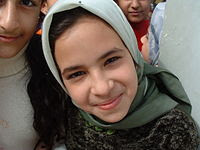 4.2 million can break down quite easily amongst these three nations. If we break up the 4.2 million Iraqis into each of these three nations (adjusted according to size), then you'll get these figures:
It would be nice for other industrialised nations to take on refugees (some already are) but the bulk should be to these three nations since they share the responsibility of Iraq's present status.
Posted by One Salient Oversight at 17:04

As an article I just blogged about says...

The idea of “open borders” to allow “the free movement of labor” is favored only by anarchists, greedy industrialists, and some hopelessly naïve libertarians. The best level of immigration is open for debate, but restrictions are essential. Unfortunately, many good people evade this issue because they fear criticism that they are heartless or a racist. The solution is to address the root cause, rapid population growth in poor nations, which is also a major cause of warfare, environmental destruction, and pollution.[6] It is far more cost effective to use government and charity funds to improve conditions in poor nations, rather than to accommodate a flood of desperate refugees.

I know there is a crisis in Iraq, we caused it. There was a crisis in Iraq before the war with 1 million stillborn babies extra due to a failed healthcare system and 500 thousand deaths of infants due to easily preventable diseases — if they'd only had an immunization program under Saddam and sanctions. In my pre-war, pre-peak oil ignorance, I thought that getting rid of Saddam would improve that 1.5 million baby and infant statistic, but maybe the statistics were just starting to improve before the war, as you've documented elsewhere.

I guess I'm just concerned about security at home. I've read chunks of the Koran... and can see where some of the trouble comes from. I don't really want Sharia law. Immigration, reaching critical mass, and then agitating for Jihad seems to be the name of the game (as documented by one ABC doco... possibly Foreign Correspondent, years ago.) The west broke their country and should help fix it. But we don't need to become them to show our sympathy.