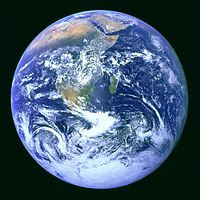 From the department of popular-consensus-is-also-important:

A sizable majority of people agreed that major steps needed to be taken soon to address global warming.

More than 22,000 people were surveyed in 21 countries and the results show a great deal of agreement on the issue.

The survey is published a day after 150 countries met at the United Nations to discuss climate change.

An average of 79% of respondents to the BBC survey agreed that "human activity, including industry and transportation, is a significant cause of climate change".

70% of Australians surveyed believed that it was "necessary that major steps be taken very soon" to fix the situation. So much for Tim Blair and his hot air.

But will politicians have the will to make unpopular changes like increased taxes on electricity and petrol? Or investing in alternative energy technology?
Posted by One Salient Oversight at 16:59

No politician will act where it counts, population growth. If we reduce our Co2 emissions by 40% by raise the population by 40%, what's changed?

A sixteen percent reduction in CO2, that's what.

Yep... if being mathematically correct, which I guess is always good. I was being semantically playful, and basically MEANT if we increase our population to the point that it emits the same amount of CO2.

But here's one for you. How much Co2 would be emitted if society lowered it's emissions by 40% but raised the population by 2% per annum for 70 years? Let's get this one mathematically correct... no semantic games in this one. (Answers on Bartlett DVD).

However, the number of people is also relevant to many, many other environmental crisis. Too many people and even if one issue is solved (Global Warming), what about Liebig's law?

Peak everything hits, and economies collapse and people die.