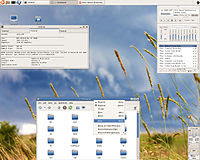 From the department of that-is-the-sound-of-inevitability-Mr-Anderson:

The old question always used to be if linux will ever be as widely used as Windows. For years there were always comments on how Linux was ready for the desktop and getting more and more popular.

Well, Ubuntu is clearly the Borg of Linux, users are being converted quicker than a Scientology rally.

I must admit that I am in awe of Ubuntu's popularity and how it appears to be gathering speed and storming the Desktop market at the moment. If this continues, especially in businesses worldwide, Microsoft will finally have something to worry about.

I use Kubuntu - which is essentially the same as Ubuntu except it uses KDE instead of Gnome. Although it has a way to go to seriously compete with Windows, I have found it to be a very user-friendly operating system, light years better than Mandriva (my first Linux distro) and more reliable and safer than Windows 98. Moreover, I am not a technology maven - I'm just someone who uses his computer a lot.

If you are seriously contemplating leaving Microsoft behind, and can't afford a Mac, then consider installing Ubuntu Linux.
Posted by One Salient Oversight at 11:46

My brain hurts at the moment, so can you please describe the words that you used to describe the difference between Kooboontoo and oooboontoo?