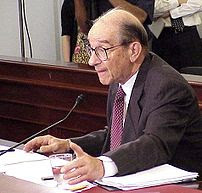 From the department of Clinton-was-better-for-the-economy:

Of the presidents he worked with, Mr. Greenspan reserves his highest praise for Bill Clinton, whom he described in his book as a sponge for economic data who maintained “a consistent, disciplined focus on long-term economic growth.”

It was a presidency marred by the Monica Lewinsky scandal, he writes, but he fondly describes his alliance with two of Mr. Clinton’s Treasury secretaries, Robert E. Rubin and Lawrence H. Summers, in battling financial crises in Latin America and then Asia.

By contrast, Mr. Greenspan paints a picture of Mr. Bush as a man driven more by ideology and the desire to fulfill campaign promises made in 2000, incurious about the effects of his economic policy, and an administration incapable of executing policy.

The White House is clearly not eager to get into a public argument with Mr. Greenspan, whom President Bush reappointed to a fifth term in May 2004. But they pushed back at Mr. Greenspan’s central themes.

Greenspan's tenure as Federal Chairman has come under scrutiny by some who say that he is partly responsible for the tech bubble and the recession that followed... as well as the current Subprime meltdown. Fortunately he has stuck by his guns and spoken truth about Bush's ineptness as a fiscal conservative.
Posted by One Salient Oversight at 20:03

The Federal Reserve should actually be taken entirely out of the picture. They are not Federal and are not concerned about anyone who has little or no money. They want to give us the American version of the Euro by mixing our money with that of Canada's and Mexico's. How about we get an American dollar that is once again backed by hard currency for starters then work on stabilizing absolute values?

It will be interesting to see how history treats Mr. Greenspan's tenure.

I believe he deserves generally good marks. I share his high opinion of Mr. Summers and his low opinion of Bush's fiscal policies.

However, he does deserve some of the blame for the tech bubble and the recession that followed as well as the Wall Street bailout he and Mr. Rubin orchestrated in the wake of the Mexican peso crisis in the early 90's.

The so-called subprime meltdown may or may not be serious. We'll have to see how things work out in the next few months.

Your header, though, assumes that presidents have more power over the economy than they do. Without the cooperation of Congress, there is little a president can do directly. Vetoing wasteful spending bills is one thing presidents can do, and Clinton was definitely better at that than Bush.