Mrs Rudd and her overseas investments 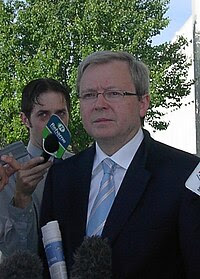 THERESE REIN, the wife of the Labor leader, Kevin Rudd, may be selling her Australian employment services operations but business is booming in Britain.

WorkDirections UK, a subsidiary of Ms Rein's Ingeus group, has just won government contracts worth £85 million ($198 million) to help disabled people get back into the workforce.

But the deal, which is expected to double WorkDirections UK's workforce, has attracted the ire of that country's public sector trade unions. They are concerned the deal does not require WorkDirections UK to retain existing government employees delivering disability employment services in the six regions covered by the new contracts.

This, to me, is no problem at all. Some may see it as a conflict of interest. Others, like the "intelligent" Tim Blair, may see it as hypocritical since the only people who associate themselves with the Labor Party are Marxists that are hell bent on world revolution.

The fact that a business owner and entrepreneur is so closely associated with the Labor Party shows, beyond reasonable doubt, that the ALP is hardly likely to be anti-business.
Posted by One Salient Oversight at 12:01

The fact that a business owner and entrepreneur is so closely associated with the Labor Party shows, beyond reasonable doubt, that the ALP is hardly likely to be anti-business.
In the US, the Republican party is often claimed to be pro-business, and the Democratic party for "the working man", yet inevitably it seems that both parties are for only favored cliques in either class. What they really seem to be in favor of is pro-reelection and will fund whatever projects or support whatever laws they feel will accomplish that. Hence we have so-called pro-working class Democrats voting for subsidies to big business, and so-called pro-business Republicans voting to increase the minimum wage.