Good news for the Anglican Church 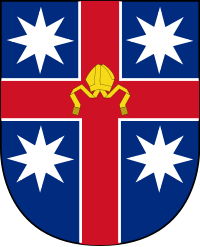 From the department of Rugby-developed-two-codes:

The Anglican Church of Australia has cleared the way for women to become diocesan bishops.

The church's highest legal authority, the Appellate Tribunal, has ruled that there is nothing in the church's constitution to prevent the consecration of a woman priest as a bishop.

The majority ruling only applies to diocesan bishops and not assistant bishops.

Anglican Church Primate Dr Phillip Aspinall says it could still be at least six months before a woman is consecrated as a bishop.

Dr Aspinall says it is a significant decision although each diocese will still decide whether they have a woman as a bishop.

As a former Anglican and someone who did not and still does not agree with the ordination of women let alone letting them become Bishops, I would have to say that this decision pleases me mightily.

The Anglican church of today has been split for some time now. Schism occurred not suddenly but gradually over many decades. The only thing that unites Anglicans today is its organisational structure and the formal ties between various dioceses.

In the grand scheme of things, letting women become Bishops is actually quite a minor problem. The ecclesiastical office of Bishop and the entire Episcopal structure of the Anglican church is not something that can be defended biblically, which means that I have significant concerns even with men being ordained bishops. Since I believe in Sola Scriptura and take 1 Timothy 2.12-15 to be a command for the church to follow when selecting those who teach and lead, I therefore see the ordination of women as either Priest of Bishop to be problematic. But, to me, breaking this sort of command is hardly a cause to disfellowship someone or some church.

What this decision will do, however, is highlight the fact that schism has already taken place. As a former Sydney Anglican, I came to the city of Newcastle looking for a solid evangelical church. I became a Presbyterian initially because there was no evangelical churches to be found within the Anglican diocese here.

It is better for the Anglican church to split up into its relevant groupings than it is to remain together. I want the Sydney Diocese to plant churches all over Australia and especially here in Newcastle. In return I am more than happy to allow the Newcastle Diocese the right to plant Anglo-Catholic or theologically liberal churches in Sydney.

There is no chance whatsoever that the disparate groups in Anglicanism can be reconciled. If Liberal Anglicans wish to preach a Christ who is not God then let them do so... just let us Evangelicals preach what we believe also. We won't interfere with you if you won't interfere with us.

Rugby split way back in the early 20th century. Out of this split came Rugby Union and Rugby League. The rules of the game were so different that the two games could not occupy the same organisational space, but were able to survive unimpeded once a formal split was recognised.

The Anglican church is similar. There are three different games of football being played under the umbrella of the Anglican church today (Liberalism, Evangelicalism and Anglo-Catholicism) and none of them are happy with the way rules and conventions are being flouted or ignored. The best way forward is a formal split. Everybody wins.

Posted by One Salient Oversight at 16:35

I agree with your take on the split, but I'm still thinking through this statement.

In the grand scheme of things, letting women become Bishops is actually quite a minor problem. The ecclesiastical office of Bishop and the entire Episcopal structure of the Anglican church is not something that can be defended biblically, which means that I have significant concerns even with men being ordained bishops.

Other than the bible describing some of the qualities of church leaders and teachers, I see freedom for the church as an organization to run in all manner of ways.

I think ANY of the current denominational "structures" would fail the biblical "model" ... because there isn't really one. Certain personal qualities are spelt out in the leadership. Certain descriptions are applied to individual churches, where some are seen as "generous" or others are seen as "disorderly" and needed to control the crowd and edify each other more. (Corinth). But as far as a structure for leaders, and levels of support and leadership for those leaders... just do whatever works.

I happen to like the slightly authoritarian approach of Sydney Anglican's. I've heard of Baptist churches being torn apart by the tri-wizard tournament they enact when voting to continue or disband their leaders.

I think getting too uppity about one Denominational "structure" being more biblical than another is just reading into the text what we want to see there, and putting on airs. The early church was hardly organized... just people meeting in house groups around whatever biblical texts and apostolic letters happened to be in their area. Just my 2 cents.

I do say I therefore see the ordination of women as either Priest of Bishop to be problematic. based upon 1 Tim 2.12-15

I know, and I wasn't disagreeing with that. As I said,

Other than the bible describing some of the qualities of church leaders and teachers, I see freedom for the church as an organization to run in all manner of ways. In other words, I agree that there are different and specific roles for men and women in the church. No problem there. But then you go on to say...

The ecclesiastical office of Bishop and the entire Episcopal structure of the Anglican church is not something that can be defended biblically, which means that I have significant concerns even with men being ordained bishops.

All I am saying is I don't think any denominational structure can be defended biblically, because there simply were no denominations in the NT church. I mean, many of these believers might have only had a few of Paul's letters and the Old Testament. They didn't even have the whole New Testament yet, let alone a Catechism or official, institutional leadership structure. House-church meetings in Rome were probably very different to Asia-Minor, and again very different to meeting in Jerusalem. No "traditions" or "routines" had sprung up yet, and some of the debates as in Paul's letter to the Galations, show that they were still figuring out the basics of the gospel.

So, I'm just highlighting that the Presbyterian structure is not biblical either.