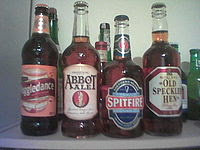 From the department of prohibition-still-doesn't-work:

Over dinner recently, Anna Peele recalls one of the first times she drank alcohol. "I was like 14 or 15," Peele says. "I ordered a beer and they served me."

She had just finished her freshman year of high school and was traveling in Greece with family friends. "We would just have wine with dinner," Peele says. "In Greece it's so not a big deal."

While that experience would cause some American parents to worry, Peele's parents weren't upset.

In fact, starting in middle school, her parents allowed her and her siblings to have an occasional sip of beer or wine. By the time she was in high school, Peele was drinking beer and wine regularly at family functions and social events. But it was always in moderation, Peele says. She says her parents' attitude toward alcohol made it seem less mysterious. "It wasn't some forbidden fruit," Peele says. "I didn't have to go out to a field with my friends and have 18 beers."

Experts say binge drinking continues to be a growing problem across the country. According to a recent report from the U.S. surgeon general, there are nearly 11 million underage drinkers in the United States. Nearly 7.2 million are considered binge drinkers, meaning they drank more than five drinks in one sitting.

In this age of "just say no," some people believe it is time for Americans to reconsider how they teach kids about alcohol. Peele's father is at the top of the list.

"We taught them to drink in a civilized fashion, like a civilized human being," says Stanton Peele, psychologist and author of "Addiction-Proof Your Child."

You cause the grass to grow for the livestock
and plants for man to cultivate,
that he may bring forth food from the earth
and wine to gladden the heart of man,
oil to make his face shine
and bread to strengthen man’s heart.

Posted by One Salient Oversight at 17:25

Labels: America, Drugs, Only in America

Our alcohol laws are insane. Not only from state to state but, as you point out, from county to county within some states.

More examples (as if any were neded):

1. The county where Jack Daniels is produced? Dry. It is illegal to purchase or consume Jack Daniels whisky in the county in which it is made.
2. In Utah, it used to be illegal to purchase a bottle of wine from a restaurant. However, you could bring wine you had purchased yourself into the restaurant, but you then had to pay a fee to have the server pour it for you. You could not serve yourself.
3. Also in Utah, while sitting at a bar, it was illegal to have more than one glass or bottle in front of you if they both contained any amount of alcohol (this one has since been changed).
4. Utah (see a pattern?) restricts who may serve liquor by the drink. Private clubs are excluded from this restriction. Guess how many private clubs there are selling lifetime memberships for $5?

The most absurd thing is, the US applies this same prohibition mindset to drugs and smoking (while subsidizing tobacco farming). Yet officials are constantly expressing amazement that they have not yet eradicated these vices.

By the way, I blame Australia: why did you have to send Foster's to our shores? We have our own mediocre, mass produced beer, thank you very much.

I'm actually not a beer drinker but I like wine. Have you tried Australian wine?

Yes, I have and it is generally quite good. My state happens to be the #2 wine producer in the US behind California.

Have you tried any Washington State wines?