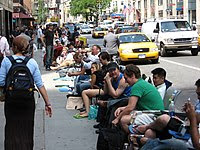 From the department of basic-economics-101:

The swarm of prospective tenants was attracted by the apartment block's affordable housing zoning, which means the rent is capped at $295 - considerably less than the rent on many one-bedroom flats of similar quality in the area.

It also means that the agent cannot conduct a rent auction and give the tenancy to the highest bidder.

The agent in charge of the inspection, Santos Sulfaro, said that as many as 150 people had lined up to view the property during the half-hour viewing period - a remarkable number, even in the accommodation-starved Sydney market.

"Normally 25 is a large group, but that was incredible," Mr Sulfaro said.

"I had over 500 phone calls in seven days. I've never seen queues like that before - people are getting pretty desperate."

The Soviet Union used price capping a lot, a process that caused lots of queues for bread.

Personally I believe that it would be better for lower income earners to given a rent subsidy by the government if they rent a flat/house in a rich area, thus allowing them to compete with the market price. So rather than "zone" a flat or house, you "zone" a person or family.

This is better for society, too, since poor families who live in rich areas are more likely to develop positive attitudes towards work and education.
Posted by One Salient Oversight at 09:29